Brandon Sloan is one of the best players from the Point Pleasant, NJ area in the Class of 2023.

The 6-foot-3, 170-pound Sloan, is a dynamic player that works as a wide receiver and defensive back. 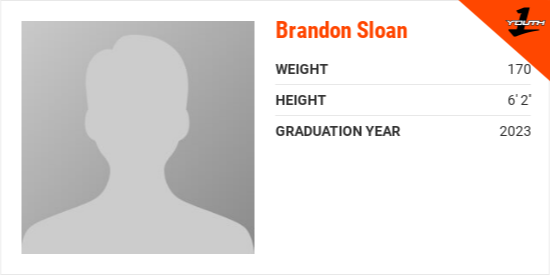 Sloan has attended camps for Youth1 and NextGen.

No matter the opponent, every game Sloan is determined to give it his all.

Sloan is going all out.

The motor is always at full throttle whenever Sloan steps between the lines.

“My mindset is to be the best and let no one beat me,” Sloan said. “If I’m the best at what I do no one can be better and I’ll win and succeed. And always think: my ball, my time and get it.”

Sloan has great passion and energy whenever he’s on the field. Sloan tells why he enjoys the game of football so much.

“I feel free when I’m on the field. It’s just a true passion. There’s nothing that gets in between me and football and I will always try to find what I can do. I get a sense of relief like, yeah it’s time to play and it’s great for stress,” Sloan said. “Anything you ever go through football can be a bi-product, like Ray Lewis said. Anything I go through I find a reason to bring football into it to make me better. Football has helped me a lot through tough times and it’s just something I love to do.”

Sloan has learned many valuable lessons from playing football that he applies to his everyday life.

“Football has taught me that life sucks and it’s unfair but make the most out of it and pull yourself back up. There’s not going to be someone to hold your hand through everything. It’s also taught me that with hard work and determination you can truly accomplish anything. I knew this but I never felt it.”

“Some of the most remembered memories are when I would make plays on defense when I was little or or when I finally got to touch the ball at RB when I was young,” Sloan said.

Sloan takes his role as one of the leaders on the team very seriously. Sloan makes sure he’s a daily positive influence on his peers.

“I demonstrate being a good teammate by always being there for my teammates whenever needed and picking them up when they fall. Also by showing that never quit attitude,” Sloan said. “The best advice I give is don’t give up, never quit, and remember why you started. There will always be tough times no matter what you go through and a lesson to that from me is make the most out of everything and don’t turn your problems into excuses.”

Sloan is appreciative of having amazing male role models that are supportive.

“I’ve learned from my coaches to always help a friend or teammate and don’t ever, matter the circumstances, give up or quit fighting,” Sloan said.

Sloan patterns his mentality after these legends.

“One being Jerry Rice not only because of his work ethic but his route running and play style and attitude. Another being Ray Lewis because of his motivation and reasons to keep pushing and that lion mentality. Those are nothing but absolutely 100 percent true in every way. Also because of how he plays and thinks. Julio Jones being another and man would I love to meet him,” Sloan said. “His playing style and just straight passion for the game is amazing. De’Andre Hopkins is another. I love how he plays and his attitude also. Tom Brady because he was an underdog and proved himself and I can relate to that in a way. I can relate to all these players in different ways. Also Rodney Harrison because some things you just cannot deny.”

“Gym, math as stressful as it gets, and science and my college courses are cool and fun,” Sloan said.

“I do anything and everything to make me a better player,” Sloan said. “I’ll do workout circuits and challenges weight lifting and of course lots of speed and agility and plyo-metrics.”

Sloan is striving for greatness in all that he does.

“For high school I want to be the best at my position, score touchdowns ,win games and get ranked,” Sloan said. “I want to shoot for the stars and try to make any showcases. I want to get noticed, go All-State or All-American. It sounds crazy but absolutely anything along the lines of being great is what I want.”

Sloan describes what he believes separates himself from the pack.

“Work ethic for sure, my determination and dedication on and off the field, my never give or quit attitude and push through everything,” Sloan said. “Skills wise, I’m a great player.”