Braylon Burbridge is one of the best players from the Fort Lauderdale, FL area in the Class of 2024.

The 5-foot-10, 150-pound Burbridge, who attends The Sagemont School, is a dynamic player that works as a combo guard. 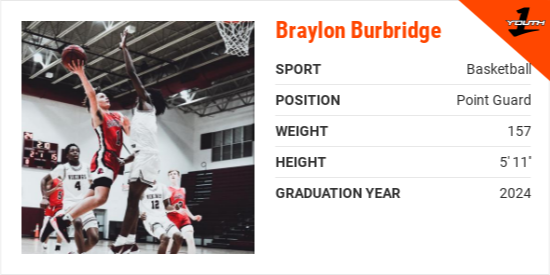 Burbridge has earned plenty of recognition during his career, such as being invited to the CP3 National Middle School Combine and Stock Risers Camp.

Burbridge is humbled by the accolades.

“They let me see where I was at as an individual, and got me recognized by a couple of college coaches,” Burbridge said. “It was a fun experience. I love to play against tough competition and compete at a high level.”

No matter the opponent, every game Burbridge is determined to give it his all.

Burbridge is going all out.

The motor is always at full throttle whenever Burbridge steps between the lines.

“I look to create for others then I look to score,” Burbridge said.

Burbridge has great passion and energy whenever he’s on the court. Burbridge tells why he enjoys the game of basketball so much.

“The thing I love the most about ball is the competition and the new family I gain while playing,” Burbridge said.

Burbridge has learned many valuable lessons from playing basketball that he applies to his everyday life.

“Playing has taught me to never quit,” Burbridge said.

Burbridge takes his role as one of the leaders on the team very seriously. Burbridge makes sure he’s a daily positive influence on his peers.

“I keep my teammates’ heads up and I talk to them in an uplifting way,” Burbridge said. “The best advice I give is to just keep playing through your mistakes and think about the next play.”

Burbridge is appreciative of having amazing male role models that are supportive.

“I have learned to stay strong in hard times and always keep my head up,” Burbridge said. “Learn through my mistakes and create for others if my shot is not going down.”

Burbridge patterns his mentality after this rising star.

“I look up to Trae Young because I’m not the fastest or the strongest but I play smart and hard at all times,” Burbridge said. “I also have good range and can shoot at a high level.”

Burbridge lists science as his favorite subject in school.

“I like to be hands on and do labs,” Burbridge said.

“My dream college is University of Miami or Arizona State,” Burbridge said. “I would love to stay home and I’ve always liked UM but I also like Arizona State because I like the area and the facilities.”

Burbridge is striving for greatness in all that he does.

“My goals off the court are to get mostly A’s and some B’s,” Burbridge said. “My goal on the court is to win a state championship.”