Jarek Patulski is one of the best players from the Charlotte, NC area in the Class of 2024.

The 5-foot-9, 125-pound Patulski, who attends Olympic High School, is a dynamic player that works as a quarterback. 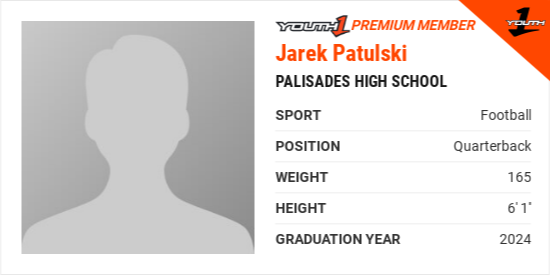 Patulski is humbled by the accolades.

“The recognition means a lot to me. The awards show how I can perform on and off the field. For example, the Pop Warner National First Team All-American Award shows how I can achieve excellent grades while being able to play on the field. The APD Foundation Invitational Elite All-Star Game recognized my performance on the field. I was very excited to play in the game,” Patulski said. “It was amazing. For the Pop Warner All-American Scholar Weekend, I was able to travel to Baltimore, MD last year for an amazing banquet. During the APD Foundation Invitational Elite All-Star Game, I had the chance to play at the Charlotte 49ers football stadium and we won the game. The game was exciting as I threw two touchdown passes. Austin Duke gave us a great tour of the campus, buildings, and bookstore.”

No matter the opponent, every game Patulski is determined to give it his all.

Patulski is going all out.

The motor is always at full throttle whenever Patulski steps between the lines.

“My mindset at quarterback is to be a leader,” Patulski said. “Many people see me as almost a second coach and I like to push and teach my teammates to make them work harder so we can be successful.”

Patulski has great passion and energy whenever he’s on the field. Patulski tells why he enjoys the game of football so much.

“I love the effect that sports can have on people and communities. I remember watching a game on Veterans Day and a veteran was talking about how football helped them through their time spent in the armed forces. It showed how powerful football is,” Patulski said. “The fans have always been a big part of my game.”

Patulski has learned many valuable lessons from playing football that he applies to his everyday life.

“It has taught me how to not pass up opportunities that are presented to you and to make the most of what you are given,” Patulski said.

“I have two favorite memories. One was playing in a bowl game during the halftime of the Carolina Panthers vs. New England Patriots preseason game at Bank of America Stadium,” Patulski said. “My other favorite memory is a home game at Steele Creek Athletic Association during a rainstorm. I remember putting my hands down on the field and the mud was up to my wrist. We call it the Steele Creek “Mud Bowl”. I will remember both games forever.”

Patulski takes his role as one of the leaders on the team very seriously. Patulski makes sure he’s a daily positive influence on his peers.

“I demonstrate being a good teammate by having good communication skills and by helping my teammates understand the plays. I answer the questions they may have not only on the field but in the classroom,” Patulski said. “The best advice I give is to work hard no matter what they’re doing and to give your full effort on everything. Everything you do makes a difference.”

Patulski is appreciative of having amazing male role models that are supportive.

Patulksi patterns his mentality after this elite quarterback.

“I look up to Matt Ryan the most. Not only is he my favorite quarterback but I like to model my play after him,” Patulski said. “ I always try to be cool and calm under pressure and to be able to be a clutch player with accuracy.”

Patulski lists social studies as his favorite subject in school.

“It’s interesting to learn about things that happened in the past,” Patulski said. “I’ve always found the world wars one the most interesting lessons in school.”

“I would be excited to play at any college and at any level,” Patulski said. “My top college choices are Appalachian State University, University of North Carolina at Charlotte, Wingate University.”

“Most of my workouts include a coach or someone from my team pushing me to make me better,” Patulski said. “I also work by myself on my footwork and throwing accuracy by throwing into a Bow Net and recording the throws on my iPhone so I can review them.”

Patulski is striving for greatness in all that he does.

“I’m not one to set personal stat goals as I’ve always had confidence in my teammates on the field. I have a goal every play to give 110 percent each down and never take a play off,” Patulski said. “My goals are team goals as I would like to lead my team to the high school playoffs and a championship.”

Patulski describes what he believes separates himself from the pack.

“I am always working to improve my game. Over this spring and summer, I have been working with teammates and varsity players almost every morning. Coach Kevin Olsen has improved my shoulder balance and footwork,” Patulski said. “Aristotle Bowles from Chowan University has really pushed me during my summer workouts. He was also a great volunteer coach on my tackle football team.”