Josiah Martin is one of the best players from the Tacoma, WA area in the Class of 2024.

The 5-foot-9, 142-pound Martin, who attends Harrison Preparatory, is a dynamic player that works as a wide receiver. 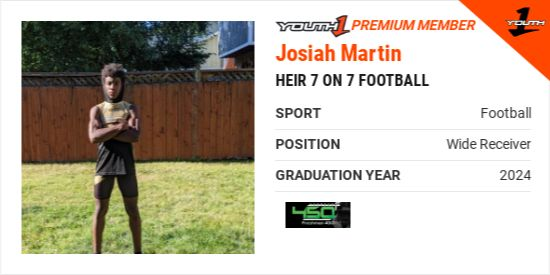 Martin has earned plenty of recognition during his career, such as being named FBU Top Gun MVP.

Martin is humbled by the accolades.

“The recognition means a lot to me. It was my first camp as a wide receiver,” Martin said. “I not only got to display my skills and hard work for the position that I trained for, it also made me realize how much potential I have to be great. It was a great experience. I got to see the other kids showcase their talents from different states as well as make new connections/friendships.”

No matter the opponent, every game Martin is determined to give it his all.

Martin is going all out.

The motor is always at full throttle whenever Martin steps between the lines.

“My mindset is to dominate my opponent mentally and physically,” Martin said. “I want to complete the tasks of a wide receiver: blocking, catching and route running.”

Martin has great passion and energy whenever he’s on the field. Martin tells why he enjoys the game of football so much.

“I love the competitiveness that everybody brings to the game,” Martin said. “I also love the hard work that comes with football and the support from my mother and father.”

Martin has learned many valuable lessons from playing football that he applies to his everyday life.

“Nothing is given to you,” Martin said. “You have to work hard and earn your place in this world.”

“It was my first year playing tackle ball on an older team through the IYFL (Indoor Youth Football League). It was the third quarter and the quarterback had thrown the ball far into the air,” Martin said. “I jumped up and snagged the ball out of the air. I loved this feeling. It was great. being on a supportive team and everyone cheering for you.”

Martin takes his role as one of the leaders on the team very seriously. Martin makes sure he’s a daily positive influence on his peers.

“I demonstrate being a good teammate by pushing my teammates to be the best they can be on and off the field,” Martin said. “I motivate them through constructive criticism. The best advice I give is to remain positive in the face of adversity. I tell them to ‘Stop whining and let’s rock!’”

Martin is appreciative of having amazing male role models that are supportive.

“I’ve learned from my coaches that you have to stay consistent with your craft. Never get complacent with anybody or any team and work hard to be the best,” Martin said. “The best advice I’ve gotten is that character is everything.”

Martin patterns his mentality after this dangerous wide receiver.

“I look up to Jerry Judy,” Martin said. “He works hard and takes his craft very seriously. He runs his routes so crisp with technicality. He runs like it will be his last time stepping on a football field.”

Martin lists math as his favorite subject in school.

“It makes you think and strategize on how to solve a problem,” Martin said.

Martin is striving for greatness in all that he does.

“In high school I want to maintain a 3.5 or better GPA,” Martin said. “I want to capitalize and maximize any opportunity that comes my way on the football field.”

Martin describes what he believes separates himself from the pack.

“My loyalty to the sport, work ethic/training, wide receiver skills, and knowledge of the game,” Martin said.