Niko Boyce is one of the best players from the Naples, FL area in the Class of 2025.

The 5-foot-11, 160-pound Boyce, who attends Collier Charter, is a dynamic player that works as a quarterback. 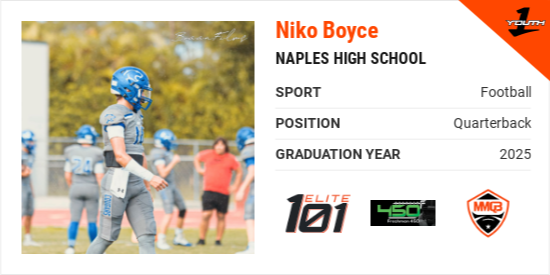 Boyce has earned plenty of recognition during his career, such as being selected for FBU Top Gun, Next Up, and the Elite 101.

Boyce is humbled by the accolades.

“These awards mean a lot to me because I’ve trained hard and worked on my craft to get here,” Boyce said. “It was a great experience not only because I met new people but because I learned new things as well.”

No matter the opponent, every game Boyce is determined to give it his all.

Boyce is going all out.

The motor is always at full throttle whenever Boyce steps between the lines.

“My mindset is to be a great leader and to make big plays when needed,” Boyce said. “Also to stay calm, cool, and collected under pressure.”

Boyce has great passion and energy whenever he’s on the field. Boyce tells why he enjoys the game of football so much.

“I love that I can be myself between the lines and let everything out,” Boyce said.

Boyce has learned many valuable lessons from playing football that he applies to his everyday life.

“Football has taught me to just do you,” Boyce said.

“Two seasons ago because I realized how good I was and how much better I could get,” Boyce said.

Boyce takes his role as one of the leaders on the team very seriously. Boyce makes sure he’s a daily positive influence on his peers.

“I demonstrate being a good teammate by helping others when needed,” Boyce said. “The best advice I give is that the most important play of the game is the next play.”

Boyce is appreciative of having amazing male role models that are supportive.

“I’ve learned from my coaches to stay calm in all situations and to be proud of what I do,” Boyce said. “The best advice I’ve gotten from my coaches is to do what makes me happy.”

Boyce patterns his mentality after this legend.

“I’m not a fan but I would say Tom Brady because he used to be a backup and since he got the chance to start he shocked everyone to be one of the greats,” Boyce said.

Boyce lists science as his favorite subject in school.

“It’s interesting and you can experiment,” Boyce said.

“I do a lot of cardio and work on my accuracy,” Boyce said.

Boyce is striving for greatness in all that he does.

“For high school I want to win a championship and get offers,” Boyce said.

Boyce describes what he believes separates himself from the pack.

“I would definitely say my skills and work ethic, as well as my character,” Boyce said.