Roberto Burgess is one of the best players from the Pennsauken, NJ area in the Class of 2025.

The 5-foot-7, 146-pound Burgess, is a dynamic player that works as a running back and outside linebacker. 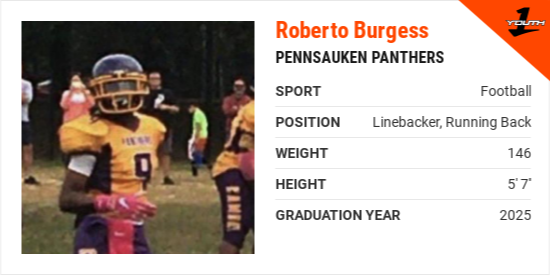 Burgess is humbled by the accolades.

“It means a lot to me. It helps me set my goals higher and strengthens my skills to help me become a great NFL player,”  Burgess said. “The experience was awesome. I felt extremely blessed to have my talent noticed by the people who can help me become a NFL player. Each experience feels like a dream come true and confirmation of all my hard work and ambitions.”

No matter the opponent, every game Burgess is determined to give it his all.

Burgess is going all out.

The motor is always at full throttle whenever Burgess steps between the lines.

“My mindset at RB is hit my cuts , my holes, play the position right and be a great player at that position. Have awesome vision seeing the field, so you know what you have to do to score if you have to have a cut back lane or something else,” Burgess said. “At OLB I’m going to come up and make plays. I’m going to be coachable, have a great attitude, be a team player and anything a coach needs, I’m there.”

Burgess has great passion and energy whenever he’s on the field. Burgess tells why he enjoys the game of football so much.

“I love everything,” Burgess said. “I love how it changes people’s lives by making dreams come true. I love that I can play, win, and have fun while doing it. Also, competition and exposure is the best.”

Burgess has learned many valuable lessons from playing football that he applies to his everyday life.

“It has taught me how to keep my eye focused on my goals and how to strategically make it through life’s obstacles trying to reach them,” Burgess said.

“My first kick return touchdown. I was so hyped. The sideline said: ‘Go Berto, go!’ I caught the ball right from the air and had great blocking,” Burgess said. “I had the speed to just run. No dancing and I just went. Hearing my mother was the best but then the coaches jumping on me hyping me up was great as well.”

Burgess takes his role as one of the leaders on the team very seriously. Burgess makes sure he’s a daily positive influence on his peers.

“When I’m on the field, there’s no ‘I’ in team. So when my teammates mess up, we all mess up. I try to encourage them to get back up. I say you can give a play up but be a demon on the next play. Make a better play and don’t give up on yourself. When someone is down I try to help pick them up,” Burgess said. “The best advice I give is to keep your head up and just make the next play better than the last one.”

Burgess is appreciative of having amazing male role models that are supportive.

“I’ve learned from my coaches how to stay humble. I always have to be a student before an athlete.  I take my GPA very seriously,” Burgess said. “The best advice I’ve gotten is that if you want to be the best, you have to work to be the best.’

Burgess patterns his mentality after this legend.

“I look up to Barry Sanders,” Burgess said. “The way he touched the ball and took off amazes me. I feel like he was the best running back in the league.”

Burgess lists math as his favorite subject in school.

“I’ve always had an A or B,” Burgess said. “It was very easy when I paid attention and that’s what I did.”

“I do speed, agility, foot work and strength work,” Burgess said. “I also work on my hands too and keep my knees up a lot.”

Burgess is striving for greatness in all that he does.

“In high school I want to be a straight A student and a starting running back on varsity,” Burgess said.

Burgess describes what he believes separates himself from the pack.

“I play against other athletes. Some of them don’t take the game seriously and they quit or give up,” Burgess said. “I keep pushing, getting better, and I want it more than some kids who don’t want it like me. I want to make my mom proud and take her out of the state.”