Sean Bah is one of the best players from the Miami, FL area in the Class of 2025.

The 5-foot-7 Bah, who attends John F. Kennedy Middle School, is a dynamic player that works as a small forward. 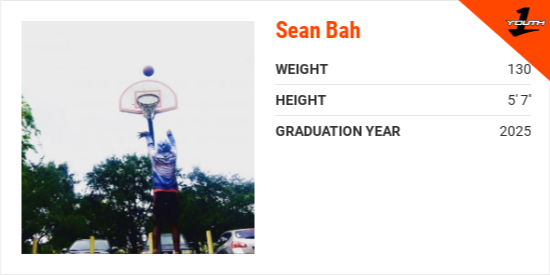 Bah has earned plenty of recognition during his career, such as being selected for the Dunk League All-Star Game.

Bah is humbled by his accolades.

“These accolades mean a lot to me and who I am as a person,” Bah said. “It helps me build self-esteem and confidence in myself to believe that I can achieve it. Experiencing a basketball All-Star Game for the first time is like no other. The hype, anxiousness, and anticipation only fed into the fun. It was different from traditional games with fundamentals and teamwork. Instead, players showed their flashy passes and shooting. However, it was fun playing freely, displaying your best moves in-game.”

No matter the opponent, every game Bah is determined to give it his all.

Bah is going all out.

The motor is always at full throttle whenever Bah steps between the lines.

“My mindset at small forward is to be a big contributor to the team’s success by grabbing rebounds, driving to the hole, and playing defense,” Bah said.

Bah has great passion and energy whenever he’s on the court. Bah tells why he enjoys the game of basketball so much.

“I love the competitive nature of basketball the most,” Bah said.

Bah has learned many valuable lessons from playing basketball that he applies to his everyday life.

“Playing has taught me about preparation and that the amount of work you put in at practice will transfer over to how you play in the game,” Bah said.

“My favorite memory playing basketball is the Aventura Recreational League championship when I dropped 30 points, 12 rebounds, and 4 assists,” Bah said.

Bah takes his role as one of the leaders on the team very seriously. Bahmakes sure he’s a daily positive influence on his peers.

“I believe you can demonstrate being a good teammate when you lead by example, try to get other players involved and no matter the score, always keep your teammates’ heads held high,” Bah said.

Bah is appreciative of having amazing male role models that are supportive.

“I’ve learned the five P’s of proper, preparation, prevents, poor, and performance,” Bah said. “This cliche believe it or not will prepare me for school, athletics, and eventually into becoming a better player and person. The best advice I was given by a coach was to keep my head up because I played a heck of a game.”

Bah patterns his play after this legend.

“I look up to Scottie Pippen the most because as the second option on the Bulls he was overlooked and underpaid but still dominated at the small forward position,” Bah said. “He should be a part of the top 10 best small forwards in the game.”

Bah lists science as his favorite subject in school.

“It is interesting to learn about the structure/behaviors of the Earth and the organisms that live on it,” Bah said.

Bah is striving for greatness in all that he does.

“My goal is to maintain my 3.8 GPA from seventh grade through high school,” Bah said.