Diego Brito is one of the best players from the Tampa, FL area in the Class of 2026.

The 5-foot-1, 103-pound Brito, who attends Montverde Academy, is a dynamic player that works as a point guard. 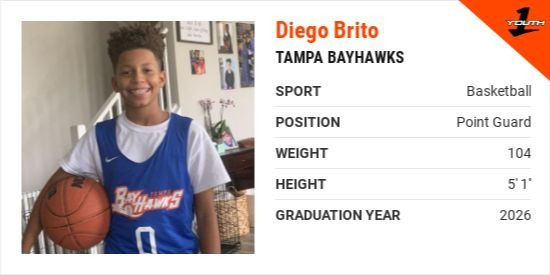 Brito has earned plenty of recognition during his career, such as winning the Hotshots Athletics 2017 US Amateur Spring Shootout Hustle Award being selected as a 2018 Recreational League All-Star.

Brito is humbled by the accolades.

“The hustle award was pretty important and special to me because out of all of the kids in that one tournament, the director chose me to be awarded with the hustle award. It also sort of stood out to me because I realized that not everyone has the mentality to get on the floor for every loose ball or run back on defense and get a block,” Brito said. “When I got selected to be on the recreational league All-Star team, it made me feel good in the moment, even though I expected to be selected because I knew I was one of the most talented players in the league. It wasn’t surprising to me and I knew that the competition wasn’t really at my level so I didn’t let it get to my head. I was happy but it wasn’t something that I get all the way hyped up about.”

No matter the opponent, every game Brito is determined to give it his all.

Brito is going all out.

The motor is always at full throttle whenever Brito steps between the lines.

Brito has great passion and energy whenever he’s on the court. Brito tells why he enjoys the game of basketball so much.

“I love the fact that I am free and the space for so much creativity just makes me feel so alive and happy,” Brito said.

Brito has learned many valuable lessons from playing basketball that he applies to his everyday life.

“Playing the game of basketball has taught me that nothing will be easy in life and that I always have to beat the person next to me to be the greatest,” Brito said.

“This memory is quite recent too. I was playing in a three on three park game. It was undoubtedly one of the toughest games I had to play mentally and physically. I was on the team’s best defender and scorer. It was so tough because I had to play the best defense I’ve ever played and the best offense I’ve ever played,” Brito said. “We were going back and forth the whole game. I ended the game with a contested step-back between the legs three. That was the same move I’ve been practicing everyday for the past two months. It felt so good to let my hard work pay off with a victory.”

Brito takes his role as one of the leaders on the team very seriously. Brito makes sure he’s a daily positive influence on his peers.

“I demonstrate being a good teammate by encouraging my fellow teammates, not putting them down, and by holding everyone accountable,” Brito said. “The best advice I have given to my teammates is look at who the best player at your age level is, find out what they are good at, add it to your game, find out what work they put in, then do more than them. For example, if the best player that plays my position in my class does two workouts a day, then I do three workouts a day. I also see what he does well and equip that to my game. My father actually told me this one.”

Brito is appreciative of having amazing male role models that are supportive.

“I have learned that to be a better player I have to stay committed and not to let any distractions take me away from my goal. I learned that to be a better person in life is to be a leader and basically a team player. When someone is having trouble with something, give them some encouragement and help them out,” Brito said. “The best advice a coach has given to me is not letting anything in your path stop you from achieving your goal and being great.”

Brito patterns his play after this standout point guard.

“I look up to Kyrie Irving because I admire his handles, court vision, and shooting abilities. I also admire his drive and dedication,” Brito said.

Brito lists science as his favorite subject in school.

“I am so fascinated with space,” Brito said.

“My dream college is Duke because what I see growing up is multiple players that attend Duke going to the league and being stars,” Brito said. “I want to be one of those stars that gets recruited by Duke and becomes the best basketball player ever.”

Brito is striving for greatness in all that he does.

“My first goal is to start on my high school team,” Brito said. “Then get a nice job while I’m in high school to help start my life, get recruited by a D-I school, start on the D-I school, and go to the NBA as an All-Star caliber player.”