Noah Moss is an explosive playmaker who is grinding to put himself on the map in the Class of 2026.

The 5-foot-7, 131-pound Moss is a versatile threat who plays as a running back, defensive back, and kickoff/punt returner for the Cherry Creek Bruins. 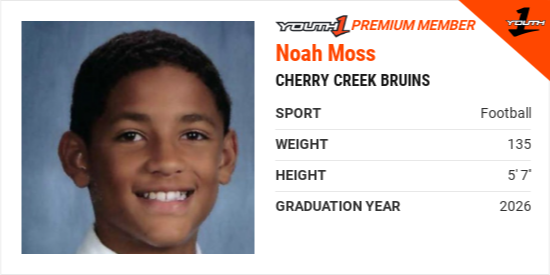 His Hudl page shows some impressive highlights for the young standout.

Moss’ father is Jarvis Moss, a former NFL defensive end. Mr. Moss compares his son’s ability at running back to one of the best in the game today.

“Saquon Barkley is someone whose game I admire and study. His vision and jukes are amazing,” Moss said. “He is different, I try to mimic his explosive and shifty play style. My dad calls us ‘home run backs.’”

With a former NFL player as a dad, Moss is in good hands with his football future.

“Camps are something my dad and I have begun to talk about and plan for,” Moss said. “I have received some invitations and will be ready to display what kind of athlete and player I am once I begin to add camps to my resume.”

Mr. Moss ensures that his son is sharpening his skill set on a regular basis.

“My dad has me do a lot of workouts when other athletes aren’t around since the beginning of time I think. All jokes aside, I have benefited from it all,” Moss said. “I have weekly training sessions with a private skills coach, Coach Q of Phenom Factory. I’ve also begun lifting weights full body for my upcoming season.”

Moss shares what brings him the most joy from playing football.

“The adrenaline rush you get from scoring touchdowns. I’ve scored 14 touchdowns in my last 16 games and I can’t get over that feeling,” Moss said. “I love the feeling of accomplishment and confidence after doing so.”

Moss has gained plenty of valuable insight into real-world lessons from playing football.

“Football has taught me a lot about teamwork, hard work, dedication, taught me how to win and lose and football has taught me humility,” Moss said. “I could go on but to sum it up I always have to stay on my grind and prioritize. Someone will always want my spot, it’s a mindset. Like my dad always tells me, talent can make you complacent and that hard work beats talent any day.”

Moss takes his leadership role on the team seriously and is committed to making his teammates better.

“I demonstrate being a good teammate by encouraging my teammates to keep pushing themselves and to stay strong. I’m not saying football is hard but it’s not always easy and positive reinforcement helps,” Moss said. “I remain strong myself because I know if my teammates see me giving it when it gets tough they won’t take my game seriously.”

Moss relishes the opportunity to have his voice be heard on the team.

“My best advice I have given teammates is probably advice my dad gave me about techniques and fundamentals, stuff like. Thanks Youth1 for the platform. I won’t let you down either.”

Moss lists history as his favorite subject in school.

“History is my favorite subject in academics. Learning about people in the past who influenced modern and everyday life has always interested me.” Moss said .”‘Those who don’t learn from history are doomed to repeat it.’”

Moss shares his favorite memories on the football field collectively and personally.

My best memory as a player I would have to say was my first year starting at running back. First game of the season, first down, first carry of the game my teammates gave me great blocks and I did the rest with a 50-yard touchdown. Exciting run, that touchdown run gives me confidence still to this day. I hope to have many more memories in the sport of football.”

Moss is targeting a pair of SEC schools on his wish list for college.

“University of Florida because my dad played there. Alabama Crimson Tide because of the amount of players they send to the NFL,” Moss said.

Moss is grateful for the support system provided by his dad and believes he has the ability to carve his own professional path.

“What sets me apart is probably that my dad is a former NFL player. First round draft pick so I have learned and know more details about the sport of football so far at my age that most grown ups may not know. I’m always paying attention to the game and I’m constantly learning. I’m also really athletic so things like speed and quickness come naturally to me.”