Tayvion Williams is one of the best players from the Asheville, NC area in the Class of 2028.

The 5-foot, 92-pound Williams, is a dynamic player that works as a quarterback and middle linebacker. 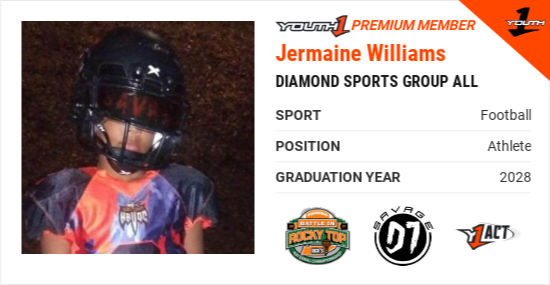 Williams has earned plenty of recognition during his career, such as capturing Defensive Player of the Game at the 2019 Showtime Elite event.

Williams is humbled by the accolade.

“Being recognized shows that I’m doing a great job on and off the field,” Williams said. “It’s a great experience to be able to go to these games because you get to meet other top talent kids.”

Williams has also attended camps for Youth1, Battle in the Rocky Top, and D1 Savage.

No matter the opponent, every game Williams is determined to give it his all.

Williams is going all out.

The motor is always at full throttle whenever Williams steps between the lines.

“My mindset is just to be able to play the position right,” Williams said.

Williams has great passion and energy whenever he’s on the field. Williams tells why he enjoys the game of football so much.

“I love winning and the hard hits,” Williams said.

Williams has learned many valuable lessons from playing football that he applies to his everyday life.

“Football has taught me to always push yourself to be better and that football is all about winning and beating up on people,” Williams said.

“Winning the youth league Super Bowl and knowing that you are part of the best team around in your area,” Williams said.

Williams takes his role as one of the leaders on the team very seriously. Williams makes sure he’s a daily positive influence on his peers.

“I demonstrate being a good teammate by being a leader,” Williams said. “The best advice I’ve given is to never give up and always have fun.”

Williams is appreciative of having amazing male role models that are supportive.

“I’ve learned from my coaches that you have to always do your best, never give up, and always push yourself to be better,” Williams said. “The best advice I’ve gotten is that school comes first then football.”

Williams patterns his mentality after the reigning NFL MVP.

“I look up to Lamar Jackson because he is smart with the ball and he’s not afraid to take a hit,” Williams said.

Williams lists math as his favorite subject in school.

“My top choices are Clemson and LSU,” Williams said.

“I do push ups and sit ups,” Williams said.

Williams is striving for greatness in all that he does.

“For high school I want to be the starting QB as a freshman and win MVP and a state title,” Williams said.

Williams describes what he believes separates himself from the pack.

“Just me being the kid that I am,” Williams said. “I love being on the field.”