Troy Brown III is one of the best multi-sport players from the Melbourne, FL area in the Class of 2032.

The 4-foot-4, 68-pound Brown III, who attends Meadow Lane Elementary, is a dynamic athlete who works as a quarterback on the football field and as a shooting guard on the basketball court. 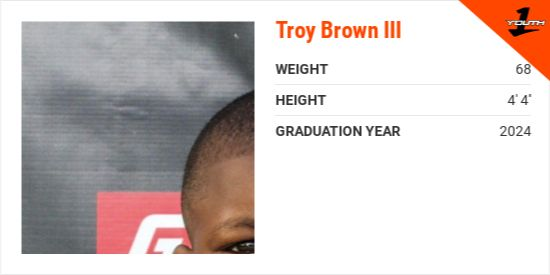 Brown III is humbled by the accolades.

“Reminds me of great memories with my teams and it motivates me to continue to train hard to remain successful,” Brown III said. “It was a great experience. It allowed me to compete against other great players and meet new friends.”

No matter the opponent, every game Brown III is determined to give it his all.

Brown III is going all out.

The motor is always at full throttle whenever Brown III steps between the lines.

Brown III has great passion and energy whenever he’s playing. Brown III tells why he enjoys sports so much.

“Football: I enjoy throwing the ball and having the responsibility of making plays, so my teammates can be successful,” Brown III said. “Basketball: I love using my dribble moves and making shots to help my team win games.”

Brown III has learned many valuable lessons from playing sports that he applies to his everyday life.

“I’ve learned that hard work is required to be successful,” Brown III said.

“Football: Throwing my first touchdown playing tackle football last year. It gave me confidence that I can throw the ball well in live games,” Brown III said. Basketball: Making my first game-winning buzzer beater to win the 5U I9 Sports Championship on Father’s Day. It was great to see my family celebrating.”

Brown III takes his role as one of the leaders on the team very seriously. Brown III makes sure he’s a daily positive influence on his peers.

“I encourage my teammates during practice drills and games,” Brown III said. “The best advice I give is to tell my teammates that they can do it. I try to uplift my teammates.”

Brown III is appreciative of having amazing male role models that are supportive.

“As a player I’ve learned to realize there will always be a lot expected out of the leaders on any team,” Brown III said. “They have put me in the position to be one of the leaders of my teams. That has allowed me to enhance my communication skills and increase my confidence.”

Brown III patterns his play in each sport after these standouts.

Brown III lists math as his favorite subject in school.

“I enjoy the challenge of solving problems,” Brown III said.

“My dream college is the University of Florida because my mom and dad attended there,” Brown III said.

Brown III is striving for greatness in all that he does.

“My goal is to lead my team to as many championships as possible,” Brown III said.