Lauren Buck, Trumbull: She scored the first goal in a 2-0 win over Fairfield Ludlowe in the FCIAC East Division championship game. Buck led the team with 12 goals. Trumbull finished 12-0 and outscored opponents 35-1.

Gulia Emmanuel, Lauralton Hall: She scored the game-winning goal 2:30 into the fourth quarter to lead the Crusaders to a 2-1 win over top seed Amity in the SCC B Division tournament final. The Crusaders finished the season with a 8-3-0-1 record.

Christina Guanci, Glastonbury: The junior forward had five goals and an assist in two postseason games – an 8-0 win over Newington in the CCC C Division semifinals and 7-0 win over Hall in the championship game. Glastonbury finished the season 14-0. Guanci also is a lacrosse standout.

Megan McCarthy, Trumbull: She had four saves in a 2-0 win over Fairfield Ludlowe in the FCIAC East Division championship game. It was her 11th shutout of the season. She allowed one goal during the season as Trumbull finished with a 12-0 record.

Lyla Mellen, Immaculate: With the Mustangs’ top two goalies in quarantine due to COVID-19, Mellen, a freshman, stepped in. In her first career start she helped beat Barlow 1-0 in the SWC South Division semifinals and had seven saves in a 3-0 win over Barlow in the championship game. She is normally a forward and will go back to that position next season.

Riley Peters, Ridgefield: Peters gave the Tigers a 2-0 lead over top seed Staples early in the fourth quarter of the FCIAC Central Division championship game and Ridgefield hung on for a 2-1 win and its first-ever postseason title. Ridgefield finished the season 8-1-0-1. 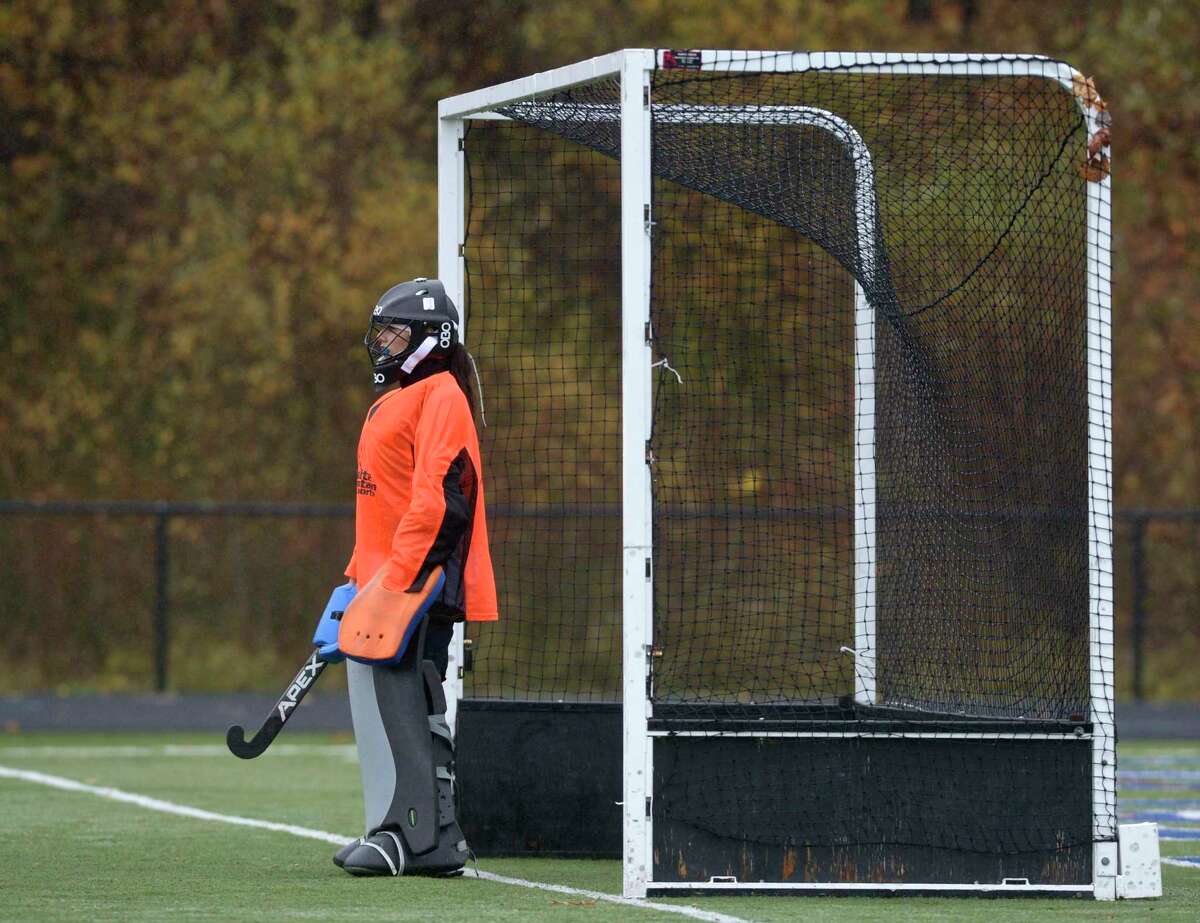 Leah Black of Cheshire (left) and Maddie Epke of Guilford fight for the ball in the SCC Division A field hockey championship at Cheshire High School on November 11, 2020.

Julia Proto, Lauralton Hall: She had 13 saves to lead the Crusaders to a 2-1 win over top seed Amity in the SCC B Division final. Two of her biggest saves came in back-to-back Amity penalty corners in the fourth quarter.

Olivia Toto, North Branford: The left wing scored a goal in the Thunderbirds 2-0 win over Old Saybrook in the Shoreline Conference championship game. She led her team with 13 goals and seven assists this season. North Branford finished the season 10-0.

Lisa van Gompel, Ridgefield: She had 11 saves to lead the Tigers to a 2-1 win over Staples in the FCIAC Central championship game. She ended up with four shutouts and allowed eight goals in 10 games. The Tigers finished 8-1-0-1.