Among the rising talents in the nation is 2025 WR/DB Deuce Wimberly, who is making a name for himself as a playmaker on the football field. Those that have seen Deuce play will tell you that this young man has dynamic game-changing ability. The best part is that he can impact the game at a high level on both sides of the ball.

For Deuce, his favorite part of the game is getting out there and competing.

“I love to win and work very hard during trainings, practices and games to get the W. I also enjoy bonding with my friends and teammates to achieve a common goal,” he added. 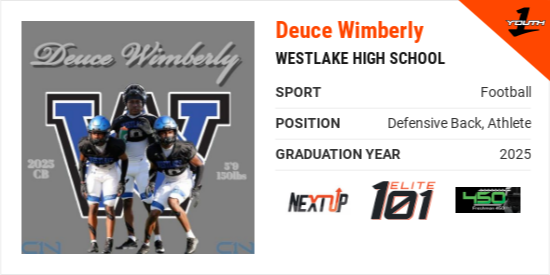 Standing at 5’6 120 lbs., Wimberly is an athlete that can impact the game from a variety of positions. He thrives at WR, where he runs smooth routes finding soft spots in the defense. Once he gets the ball in his hands, his speed and quickness allows him to dice up the defense as he racks up more yardage.

On defense, Wimberly prides himself on locking down one side of the field. He has a nose for the ball and knack for making the big play. Throw the ball his direction at your own discretion, as he’ll use his superb technique and supreme instincts to make life tough on opposing Quarterbacks and Receivers.

“I love clamping receivers up. It’s a great feeling being on Deuce Island, get an interception or the clamp a WR so tight that the QB doesn’t even throw my way,” Wimberly said of playing Defensive Back.

“Playing WR is fun because I love to catch the ball in open space and make plays,” he added.

Others have taken notice of Wimberly’s talent. He’s either participated or been invited to participate in elite camps and events such as Cam Newton All-Star 7v7 15u squad, an invite to Under Armour Middle School Camp, The Football Hotbed Middle School Invitational Camp, and an early invite to NextGen’s The Show.

“Toughness, ball awareness, quick feet, good hips, and a will to win! I feel as though the ball is mine only when it’s in the air and I’m going to get it,” Wimberly said.

The Atlanta, GA native is proving to be one of 2025’s budding talents. He credits his time training and playing against older kids as a key to his development.

“I train with the best DB trainer in the country at iDareU Training Academy in Atlanta 3 days/week. We call iDareU, Monsterville because they create monster DB’s. I also do weekly speed training,” Wimberly said.

“I feel as if I’m making lots of progress as a player. I feel as though I’m a little ahead of my 2025 class because I’ve been playing with older groups since I was 11. I played 15u 7v7 with Football Hotbed when I was 12 and started every tournament. I tried out and made the Cam Newton All-Star 15u squad at 13. I also train with some of the top DB’s in 2022 and 2023 which pushes me to work harder,” he added.

As he looks to take his game to the next level, Wimberly has some areas of his game he plans to focus on.

“I’m working to improve my speed and quickness by getting out of my breaks while  getting stronger using resistan ce band training,” Wimberly said.

“Also, understanding all coverages, being more physical in man coverage and continuing to get stronger and faster before entering high school,” he added.

2025 WR/DB Deuce Wimberly has earned his reputation as a rising star. With his ability to make big plays on the football field, Wimberly has a chance to be one of Georgia’s next big-time athletes.

For more on Deuce Wimberly, check out his highlights below.