Basketball players must wear masks. Is it safe?

Once Gov. Ned Lamont mandated everyone between grades K-12 must wear a mask while playing moderate risk indoor sports such as basketball, the question most people asked was obvious.

Everyone will have an opinion one way or another. People in the medical profession probably could debate it as well.

Dr. Matthew Rothbard, an athletic trainer who teaches athletic training at Southern Connecticut State University, feels it is safe to wear a mask.

“Is it safe? Yes, it is safe,” said Rothbard, who is in his 12th year at Southern Connecticut and has been an athletic trainer for more than two decades. “Athletes in close proximity of each other, the prevention of spreading COVID outweighs the risk of negatively impacting performance. It outweighs the risk of not being able to play at all. If you give me a choice of playing with a mask or not playing at all, I’ll play with a mask.”

Any team practicing or competing in basketball has to wear a mask at least until the end of the calendar year under guidelines released Thursday. Winter sports practices were originally scheduled to begin on Nov. 21, but the CIAC has pushed back the start of the season in order to review the latest health guidance.

The CIAC Board of Control is scheduled to consider options about the winter season on Nov. 17.

“If you asked me a month ago if we would play with masks, I would have said no way, but now I say I’m all for it,” Fairfield Ludlowe boys basketball coach John Dailey said.

Hamden Hall Country Day boys basketball coach Sean Doherty said he has been running drills with players in cohorts of three for a couple of weeks. Hamden Hall resides in the Fairchester League and is not a CIAC school. 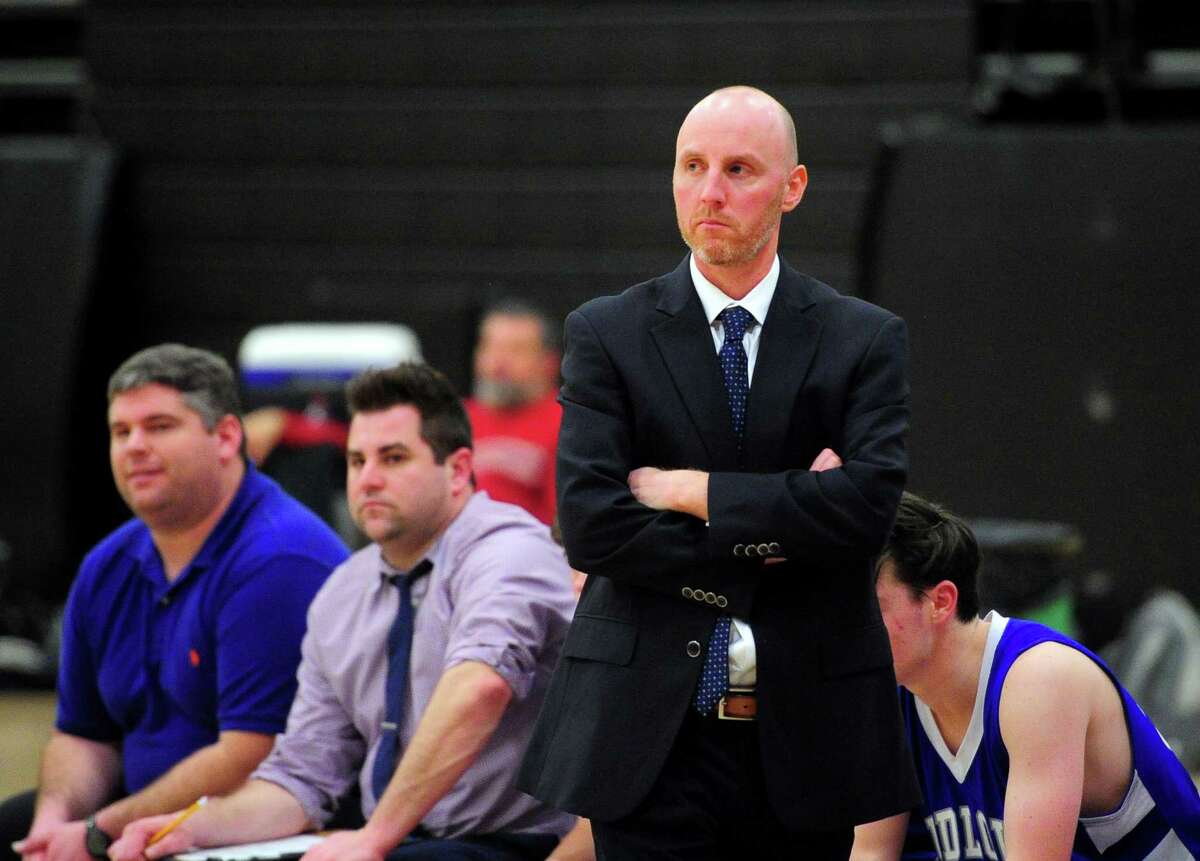 Fairfield Ludlowe boys coach John Dailey during a game against Trumbull in January.

Hamden Hall boys coach Sean Doherty on the sidelines against St. Luke’s-New Canaan during a game in 2018.

Hillhouse girls coach Catrina Hawley-Stewart during a game against Wilbur Cross in January.

The drills the players are working on are all done with masks, Doherty said. They have done some 30-second sprints in between the drills. He has had reservations on how hard to push the players on those sprints.

“It’s going to be hard to maintain that during a game,” Doherty said. “I don’t have the understanding of breathing through a mask at a high level or high rate. It’s one thing shooting around, but what about if you are exerting yourself at the highest level while adding a mask to your face?”

Said Dailey: “How can kids play or run at a high level with masks on? What about a kid who comes down the lane and takes a shot in the face, has the mask ripped off? Isn’t that dangerous?”

While Rothbard said it is safe and can be done, he feels wearing a mask will “negatively impact high intensity performance” starting with air flow to the lungs.

“That is called ventilation. It restricts air flow. It’s kind of like a chain reaction,” Rothbard said. “The second thing that happens is it decreases the body’s ability to transport and use oxygen. That in turn decreases the amount of oxygen in the blood and that’s called oxygen saturation.”

Rothbard noted that wearing a mask could also lead to a decrease in the power or ability to jump and athletes could become more fatigued quicker than normal because of the restricted oxygen flow.

To Daley’s point about masks falling to the floor, Rothbard simply said for the game officials to stop play as soon as it is possible to and either put the mask back on or get a new one.

“For close contact, you have to stay within close proximity for 15 minutes. Is there a risk? Sure, but it is minuscule, it’s negligible,” Rothbard said. “Of course the mask is going to come off. It comes off when you are going to the grocery store. The masks are not custom-fitted off the shelf. They are not perfect so you do the best you can with what you got.”

Hillhouse girls basketball coach Catrina Hawley-Stewart believes it should be safety first as long as the kids get a chance to play.

“I have a lot of kids who love the sport and really want the opportunity to play. But yes, safety first, absolutely,” Hawley-Stewart said.

Bill Lunn, the director of the Human Performance Lab at SCSU, hopes to one day conduct tests with athletes wearing masks. Lunn said the lab is not currently conducting any tests due to the risk of exposure to COVID-19.

“If we were to test them, we could determine airflow through the mask at varying exercise intensities, and also could measure carbon dioxide output/oxygen uptake while wearing the mask,” said Lunn, also a professor in the Department of Health and Movement Sciences at the university. “I have seen anti-mask enthusiasts provide evidence of the danger of re-breathing carbon dioxide when wearing a mask, but these results are dubious, at best.”

Hillhouse was among a number of winter sports teams last season that lost an opportunity at a state championship when the CIAC canceled the remainder of the postseason last March. Also, New Haven has been in remote learning since last March, opting not to go back in September.

“We miss our family, we want to be together, so if it takes masks to get us together, we will do that,” Hawley-Stewart said.