TRUMBULL — Back in September, when the high school volleyball season was in jeopardy, Trumbull senior Ali Castro had just one thing on her wish list.

“All I wanted to do was play,” Castro said. “I told my friends, I just need one game. I really just want to come out on my home court and play with my friends one last time.”

Castro and the Eagles got more than just one game, and they even added another championship to their dynasty.

It’s the third championship in as many seasons for the Eagles, who won their first FCIAC title in 2018, and their first state crown when they swept their way through the Class LL playoffs last fall.

“We’ve been really working for this championship because even though it wasn’t the season we wanted, we were super excited to get an opportunity to play,” Trumbull coach Nicole Trommelen said. “With this special group of seniors, to not get them a season would’ve been hard. (They’ve) worked so hard from day one when they stepped into the gym, and I’m so excited they were able to accomplish this.”

The win gave Trumbull (11-1) a total of 50 victories since the start of the 2018 season, an average of nearly 17 wins per year, a mark made all the more impressive by the fact that it includes this year’s abbreviated schedule.

“We have nine seniors this year, and I’ve been through so much with this team,” said senior Bailey Cenatiempo, who has been on the varsity team for four years. “I have so many memories from this team and it meant so much for us to win this last game.”

This year’s seniors are a special group for Trommelen, who was the freshman coach their first year at Trumbull High, and then took over as the Eagles’ varsity coach the following year. 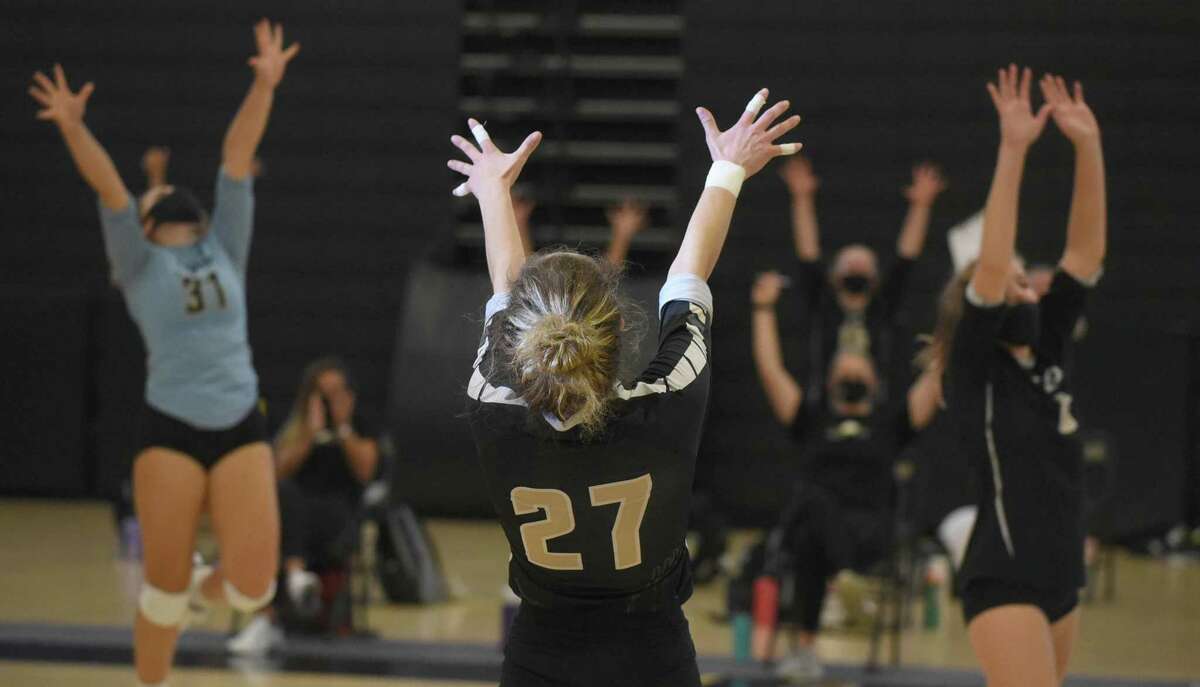 The Trumbull Eagles, including Ali Castro (27), Kat Zanvettor (31) and Bailey Cenatiempo (6) celebrate a point during the FCIAC East Region girls volleyball final against Ludlowe in Trumbull on Saturday.

Ludlowe’s Jane Ransome (8) goes up for a shot during the FCIAC East Region girls volleyball final against Trumbull in Trumbull on Saturday, Nov. 7, 2020.

Ludlowe’s Phoebe Koskinas (1) awaits a serve during the Falcons’ match at Trumbull in the FCIAC East Region girls volleyball final on Saturday, Nov. 7, 2020.

Fans in the stands, along with cardboard cutouts of some of the Trumbull players, during the FCIAC East Region girls volleyball final against Ludlowe in Trumbull on Saturday, Nov. 7, 2020.

Trumbull’s Bailey Cenatiempo (6) gets set to serve during the FCIAC East Region girls volleyball final against Ludlowe in Trumbull on Saturday, Nov. 7, 2020.

Trumbull’s Ali Castro (27) sets the ball during the Eagles’ match against Ludlowe in the FCIAC East Region girls volleyball final in Trumbull on Saturday, Nov. 7, 2020.

Trommelen said the players went into Saturday’s final with the same focus they’ve had throughout their careers.

“As they were coming in, especially the seniors, it’s the last time they’re going to put on the Trumbull jersey,” Trommelen said. “To them, that’s special and it didn’t matter what we were playing for. This meant something to them. Their attitude, the way they carried themselves, and how loud they were today, they didn’t want to let this opportunity fall.”

Ludlowe (6-6), which won the FCIAC title last fall, had another solid season with a team that included just four seniors. Ludlowe was the only team to beat Trumbull this year, topping the Eagles 3-2 on Oct. 8, and Saturday’s match was the fifth meeting between the two teams, with Trumbull winning four times.

“We’re proud of ourselves,” Ludlowe junior co-captain Gabby Price said. “There were obviously a lot of obstacles that we had to face, like wearing a mask and not being able to play all the teams in our conference, but we made the best of what we did. We could’ve done some things better, but we improved, and I’m proud of the way we played and kept our heads up the whole time.”

Ludlowe also played its two postseason matches without head coach Meghan Skelton in the gym, as she was isolated at home due to a close contact. Skelton was still a presence for the Falcons, however, as she watched the game and coached her team from a distance via an iPad.

“It’s definitely been weird,” Price said of the situation. “It’s obviously not something we thought would happen, but having her here, even on an IPad, it shows how much she cares about us and our success. We’re all super grateful that she spent the time looking at us from the computer because I’m sure it wasn’t easy for her.”

Trumbull had contributions from up and down the roster.

The first set was tied at 6 when Trumbull went on a 9-3 run. The Eagles got to set point at 24-12, but Ludlowe fought back with five straight before Olah ended it with a kill.

Ludlowe came out strong in the third set behind some strong play by libero Allie Clark, and outside hitter Jane Ransome and middle Tatum Holdereid. The Falcons had a 9-4 lead, but Trumbull rallied to tie it at 10 and took over from there, eventually winning 25-16 to ice the match.

For the Eagles, the final was a fitting end for the seniors, who have left a championship legacy with the program.

“Over the summer, we were so nervous and upset that we weren’t going to be able to play,” Cenatiempo said. “Volleyball means so much to all of us. We wanted one last time to play with each other. We have a special bond and we have so much fun on the court.”

“They mean everything to me,” Castro said of her teammates. “I’ve been playing with three girls on this team since I was 12, I met my best friend through volleyball, and this senior class, we’re all so close and it’s so much fun.

“I love coming in and playing volleyball, but I also love just coming in every day and seeing my friends. That’s what really made this season so special.”