MILFORD — For Tori Lanese and her senior teammates, thoughts of a completely unique season coming to an end did not sit well with them. Those thoughts had to be flashing around plenty in the opening round of the Southern Connecticut Conference Division A tournament.

When all was said and done, Lanese, along with fellow Foran seniors Paige Carlson and Mary Grace Weissauer, refused to let the season come to a close. The trio made big play after big play and helped the fourth-seeded Lions to a 22-25, 25-15, 26-24, 21-25, 16-14 victory over fifth-seeded Lauralton Hall at Foran Monday evening.

“We get to continue our season,” Lanese said. “As seniors, we get to play another game. We get to play at Amity. We have lost to them twice this year, but we have been building our team bonding. We need to use the momentum we got today against Amity.”

The Lions (7-6) advanced to the division semifinals on Wednesday at 5 p.m. at top-seeded Amity. The Spartans beat the Lions twice during the regular season.

“I can’t tell you how proud I am of them,” Foran coach Julie Johnson said of her team which was playing without three starters. “They are so resilient. When we got behind, we came back. When we lost a couple of points, we never let up. We were focusing on one point at a time.”

For the Lions, their three-game losing streak came to an end thanks to some clutch performances in the fifth game. The Lions jumped out to a 4-1 lead on a kill by Lanese, and increased the margin to 7-3 on an ace by Carlson.

With Weissauer on the service line, the lead grew to 10-4 and Foran looked as if it would cruise to the semifinals. 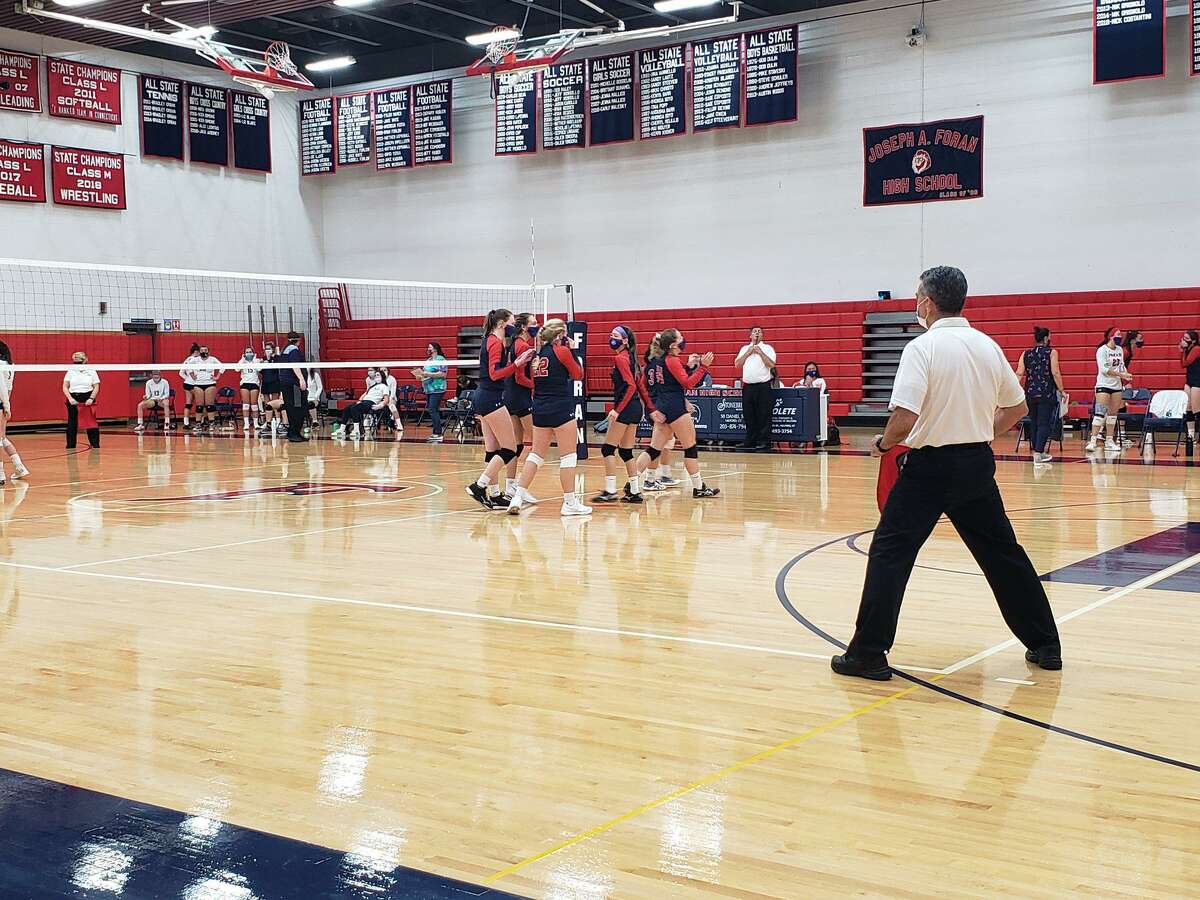 Action from Monday night’s match between Foran and Lauralton Hall

Lauralton Hall (4-9) would not go away quietly, going on a 10-4 run of its own to even the game at 14. The run saw three kills by Quinlan Elliott, a kill by Skylar Wingate, and a block by Elisabeth D’Albero to get within 14-12.

“I can’t say enough about the senior leadership on this team,” Lauralton Hall coach Laura Discenza said. “We have had that all year. We showed tonight we will not give up. They play for each other. You can see they are out there playing for each other.”

Foran then battled back. Carlson’s kill put Foran up 15-14, and the play of Carlson and Ava Steigbigel helped the Lions clinch the victory with the final point.

“Some components of our team were new out there,” Johnson said. “We have been working with them the past week. We played Shelton and we were trying to find ourselves. Today we looked more confident out there. I am proud of how we responded.”

The match was one of will as each team had long rallies, point-saving plays, and key defensive plays. The match also saw a long rally in the third game, which brought Lauralton within 20-19, cause a stoppage in play for a mask break.

“This feels good,” Lanese said of moving on. “We have fans watching on camera. It was different not having the fans here and the enthusiasm they bring.”

After the two teams split the first two games of the match, the third game was a classic as Lauralton used a kill by Wingate to help battle back and even the game at 22. A kill and an ace by Lanese had Foran up 24-22, before Lauralton battled back to even the game at 24.

That was as far as Lauralto Hall would get in the third quarter as a pair of errors helped Foran win the third game by two points.

Wingate again came up big for Lauralton Hall as her kill gave her team leads of 14-13 and 18-15. Foran got as close as 24-20 on a kill by Lanese, but an error by the Lions helped Lauralton to a fourth game win.

“I am so proud of this team with all the hurdles they have had to overcome,” Discenza said. “They battled every game.”

The senior Farruggio finished with 30 assists and four aces for Lauralton Hall. D’Albero had a solid night in defeat as she finished with 13 kills, seven digs, and three blocks, while Veronica Butler had 13 digs.