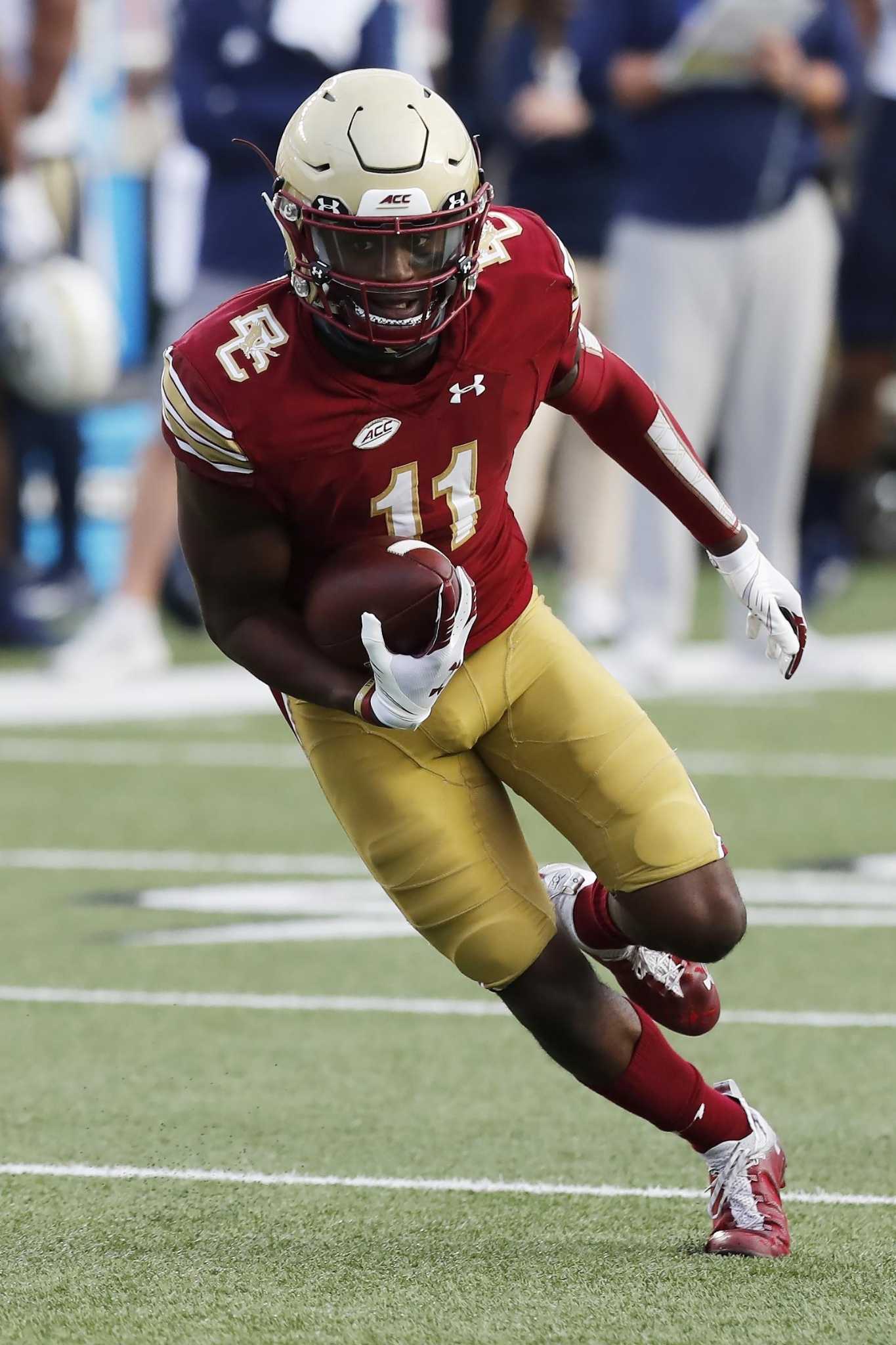 There was, Joe Tessitore said, a stretch of the second quarter in Death Valley when three New Haven-area kids were tearing up the No. 1 football team in all the land.

“It was unbelievable,” Tessitore said.

Without Trevor Lawrence, Clemson would recover in the second half Saturday to eke out a 34-28 victory over Boston College. Still, we can agree on a few things:

The Eagles sure look to be a happier team and a program with momentum under first-year coach Jeff Hafley.

That was one heck of a game between Choate Rosemary Hall and Cheshire Academy in 2016.

Brandon Sebastian, John Tessitore and CJ Lewis, three New Haven-area kids, took turns providing highlight-reel stuff in giving BC a 28-13 lead at Clemson. John’s dad deserved the kudos he received from all over with the professionalism of his ABC call on his son’s trick play that set up Lewis’ circus touchdown catch.

“My dad would have been doing backflips,” Sebastian said.

Me too, Brandon. Me too.

But let’s not get ahead of ourselves.

With the ball at the BC 1-yard-line and Clemson about to tie the game at 14 early in the second quarter, Travis Etienne fumbled the handoff from D.J. Uiagalelei. Sebastian, the redshirt junior cornerback from West Haven, scooped up the ball and shot out of the pack for a 97-yard touchdown return.

“I’m on the backside corner in goal-line personnel,” Sebastian said. “I get off the edge with Jahmin Muse and I see the ball fumbled by Etienne. Jahmin hit him and the ball was right in front of me and bobbled into my lap.

“My first reaction was, ‘Go score!’ The adrenaline was insane. I was running as fast I could.”

From the sidelines, Lewis heard everyone screaming, “Ball! Ball!”

“Once Brandon picked it up and I saw open grass, I’m like, ‘No one’s catching him.’ I started running after him, screaming and hollering.”

Sebastian also returned a blocked field goal 58 yards in the Birmingham Bowl loss to Cincinnati in January. He can scoop and score, and Saturday he led BC with seven tackles.

After a Clemson field goal, Aaron Boumerhi lined up for a 40-yard field goal with a little more than a minute left in the first half. John Tessitore, redshirt sophomore kicker and punter as well as the Eagles’ holder from Wallingford … let’s let Dad make the call.

“As they split out Danny Dalton — it’s a fake! Tessitore is under center. Fourth-and-2 and he got them to come offside! John Tessitore came up and played quarterback at the last second and they may get a first down out of this.”

BC did get the first down.

“I had no idea it was coming,” Joe Tessitore said. “The week of a game, and we’ve been in the situation twice, he’s a player, No. 98, and I’m a broadcaster. I do know he is a guy involved in a lot of fakes. He gave a hard count in the holder position, with no snap, and the tight end motioned. My football instincts told me this kid may be up to something here.

“From a football standpoint, it was really cool. The call was authentic. I gave it straight. It was a stunning play, a potential upset of the No. 1 team that’s on its heels.

“The dad side of it didn’t really hit me until there was a commercial break and halftime. Greg McElroy (his analyst partner) said a few things to me. The emotion of it, the realization, ‘Holy s**t! It’s your son.’ The guy you watched grow up and were with him on practice fields, punched me later as the game and weekend went on.”

I’ve known Joe since he worked at WFSB in Hartford in the early ’90s, long before ESPN fame and “Monday Night Football.” You couldn’t help but be thrilled for him. Everyone from Troy Aikman down the line texted him.

“We’ve practiced the play a thousand times,” Sebastian said. “It was cool to see it work. And it was cool after the game to hear his dad announcing it. That was crazy.”

Next play was an 18-yard touchdown pass from Phil Jurkovec to Lewis.

“We’re in the huddle, got the play call and Phil kind of a gave me a look like he wanted to take a shot,” said Lewis, a redshirt junior from Hamden. “There was man-to-man coverage. We had a check and it was to run a ‘go’ in the red zone. I saw Phil looking at me. I kind of looked too early. I should have run my route a little longer.”

Lewis felt Clemson defender Mario Goodrich trying to nudge him out of bounds. He didn’t want to push back and get caught for interference.

“I stayed strong,” Lewis said. “I didn’t want to flash my hands too early.”

Goodrich swatted at the pass in the end zone. Lewis thought the ball was going to be tipped. It wasn’t. The ball hit him in the gut, but he got his hands on it. The ball hit the top of his leg and dropped. He showed terrific concentration and grabbed it inches from the turf.

“Just three Connecticut kids doing their job at a high level,” Sebastian said. “Doing our best to put CT on the map.”

With Lewis’ length — 6-foot-4, 220 pounds — and hands, and Sebastian’s speed and skill, Tessitore thinks both are pro prospects. Lewis originally committed to Tennessee as a quarterback before decommitting for BC and becoming a wide receiver. Why?

“CJ has the ability,” Sebastian said. “He’s 6-4. It has taken some time. He played quarterback his whole life. He has gotten the opportunities and it’s clicking. I’m really happy for him.”

The two already were roommates when Sebastian’s younger brother Bryce, a redshirt freshman, joined them. He is known as Bug. They all went to Cheshire Academy. And along with CJ Holmes and Tarik Black, this was one stacked prep school team. Choate, with primarily Ivy League-level talent, beat Cheshire Academy 33-30 in September 2015 when Lewis’ fourth-down pass fell incomplete.

Tessitore watched the game on video. He was calling an LSU game. John kicked three field goals and four extra points for Choate. He also sailed one kickoff into the end zone that Sebastian returned 105 yards.

“Tess was the last defender back, I had to beat him with speed,” Sebastian said. “But Tess and Spencer Witter (who also went to Choate) are always messing with me, CJ and Bug about that game.”

That means there are enough Connecticut players in FBS locker rooms to tease.

“That makes me so happy,” Sebastian said. “We’re such a small state and really don’t get enough recognition.”

“We’re starting to see Connecticut ballers make make noise on the big stage,” said Lewis, who goes on to list many of them. There will be several in Syracuse uniforms Saturday when BC — 4-3 and a 14-point favorite — plays at the Carrier Dome.

“With the minimum amount of time we had because of COVID and the coaching changes, I feel like we’re headed in the right direction,” Lewis said. “It’s like a breath of fresh air. The players are very happy and enjoying playing the game a lot more. We’re ready to bring BC back.”

“We have really great chemistry,” Sebastian said. “We all love each other. We’ve been through a lot of hardships and it made us stronger. And dealing with COVID and not being around anyone but our teammates has made our bond stronger.”

After the death of his older brother Jordan of cancer at 24 in 2017, Sebastian’s parents, Craig and Mayra, have gotten the chance to see their sons play together. BC is closed to fans, but the two went to Virginia Tech and saw Bug get his first action. Craig was at Clemson. This is a terrific family and the loss of Jordan, who played at Rhode Island and was working on his master’s degree, was a profound one.

“A week before he passed, Jordan gave me his wristband,” Brandon said. “I haven’t taken it off in three years. He used to tell me and Bryce, ‘Control what you can control. And always give 100 percent.’ I live my life by those words.

The wristband reads “Jordan strong” on one side. “Dominate the day” on the other.

It is Brandon’s daily reminder there will be challenges great and small ahead.