Nico Ragaini says it’s fairly amazing who you run into on the fields of the Big Ten. Last week, there was Penn State quarterback Will Levis from Madison and Xavier-Middletown, and cornerback Marquis Wilson from Windsor and Avon Old Farms.

“Will Levis and I have been playing against each other since like the fourth grade,” Ragaini said earlier this week. “I know him really well. We threw together over quarantine when we were both back home.

“Madison was always good in youth football and then he went to my rival in high school. It’s a pretty cool story, actually. And it’s nice to talk to a Connecticut player every once in awhile after games instead of shaking hands with a bunch of people you don’t know.”

The cooler story is what drives Nico Ragaini, the East Haven kid who went to Notre Dame-West Haven and then spent a year at Avon Old Farms. Ragaini was twice the New Haven Register Male Athlete of the Year. He was a six-time All-State selection in three sports (football, lacrosse and indoor track). He was the state’s all-time leader in career receptions with 222. All-Everything in football.

He was too small. From too small a state. Too something.

As a redshirt freshman last year, Ragaini led Hawkeyes receivers with 46 catches to go with 439 yards. After a bout with COVID late in the summer, he is back at again in 2020 with a team-leading 165 yards entering a 26-20 victory over Nebraska. He had two catches Friday for 24 yards and would have added a touchdown reception if Spencer Petras hadn’t slightly overthrown an open Ragaini in the first half.

“In high school, when people didn’t believe in me and didn’t give me the offers other people in Connecticut had, it drove me insane,” Ragaini said. “I’m extremely competitive. To be completely honest, it killed me when other kids in my school and other receivers in the state were getting offers. That’s what made me who I am today, pretty much.

“I forgot a little bit about it when I first got to Iowa, because my goal was to get a Division I offer and when I first got here my freshman year I was content with just getting it. I started to realize again that I have to always play with that chip on my shoulder, because that’s what makes me who I am as player. Angry, really, and remember all the people who doubted me. I’ve just got to use that to get to the next level as a wide receiver here and hopefully as far as I can play the game for.”

Iowa quarterbacks coach Ken O’Keefe, a Milford native, attended Notre Dame-West Haven and is friends with longtime former coach Tom Marcucci. O’Keefe was coaching with the Dolphins, but said if he went back to college he’d try to give Ragaini an opportunity someday.

“I was banking on him going to college because no one was taking a shot on me,” Ragaini said. “Not even UConn, which hurt me, really.”

Ragaini turned to Avon Old Farms and an extra year of prep school football. Stacked team with lots of DI talent, he said, a lot of fun. Halfway through the season, he started talking seriously to O’Keefe.

“He called me, I think, on New Year’s Eve,” Ragaini said. “He told me he’d call me the next day, that there’s a 50-50 chance we’re going to take you. I honestly was a little upset he told me that, because I had been toyed with so many times by coaches. I didn’t even want to know there was a 50-50 chance. I wish he had just told me one way or the other.”

Sure enough, the call came the next day. There was no decision. Iowa probably would be calling the next weekend.

“I’m waiting and they didn’t call Saturday into Sunday,” Ragaini said. “It was killing me. Coach O’Keefe sent me a text message , ‘Nico, I’m sorry, but we’re probably not going to take you.’ I was like really crying. At that point, it was awful. I don’t know what switched in their mind, but a couple of hours later he called me and said they were going to offer me a spot.”

Ragaini drove back to Avon Old Farms the next day, a Monday, packed all his stuff up and hopped on a plane for Iowa three days later.

“I’m very blessed they gave me an opportunity here and so happy they took a shot at me,” Ragaini said. 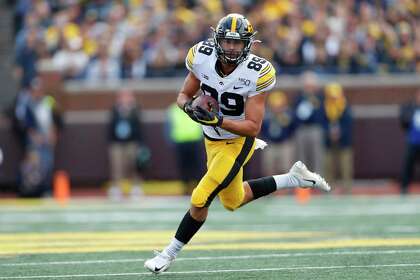 Most people think run when they think about the 4-2 Hawkeyes, yet there have been a number of quality receivers in Iowa City. Ragaini has studied them. Nick Easley, who was on the practice squad and got to play a little with the Bills the past few years, mentored Ragaini early on. He gained comfort in the slot, learning how to go against linebackers and not only cornerbacks.

The comparison for players who look and play like Ragaini are obvious. Ten years ago, it was Wes Welker. Now, it is Julian Edelman. Before giving way to Charlie Jones in 2020, he was the primary punt returner last year … like Edelman has been in his career.

“The same, whatever, small, no offers, everyone ties the story together,” Ragaini said. “But really any slot receiver I study. Even yesterday, I looked up Cooper Kupp on YouTube, he had some crazy, ridiculous route. Every time I watch an NFL game I try to watch every route, watching and learning everything I can. It’s really more of a craft at this point. Everyone is so good at this level, so if you can do the tiny little things that separate you from everyone else, that can make you successful.”

There’s never a good time to get COVID, but Ragaini probably found it. He tested positive after the Big Ten decided to postpone football on Aug. 11 and before the conference’s chancellors and presidents changed course on Sept. 16 and decided to resume play on Oct. 23-24. Ragaini said he was asymptomatic and placed in a hotel. He called it a little vacation.

“I don’t want to say I was lucky, but lucky enough to get it before we started football back up again,” Ragaini said. “Our team has handled it well and we came to work every day grateful for the opportunity because it was taken away from us for a month. It’s a horrible feeling.

“You’ve really got to think about your priority here. Is your priority to play the sport you love? Or is your priority that you want to go to the bars and have fun? Iowa City, we have like the perfect college town here. But you go into the bar or you are around a bunch of people at a party and get COVID, you’re pretty much out a third of the season.”

If families are to get into games, Ragaini said, they need to get a COVID test a few days before.

“Thankfully, I have the craziest family in the entire world and as many as possible come out,” Ragaini said. “My dad hasn’t missed a game, pretty much, since I’ve been in college.”

Twelve family members and friends drove out to State College, Pennsylvania, last week, a rousing number in the time of COVID.

“I’m extremely blessed for my family and friends and how much they believe in me,” Ragaini said.

Even if others didn’t.