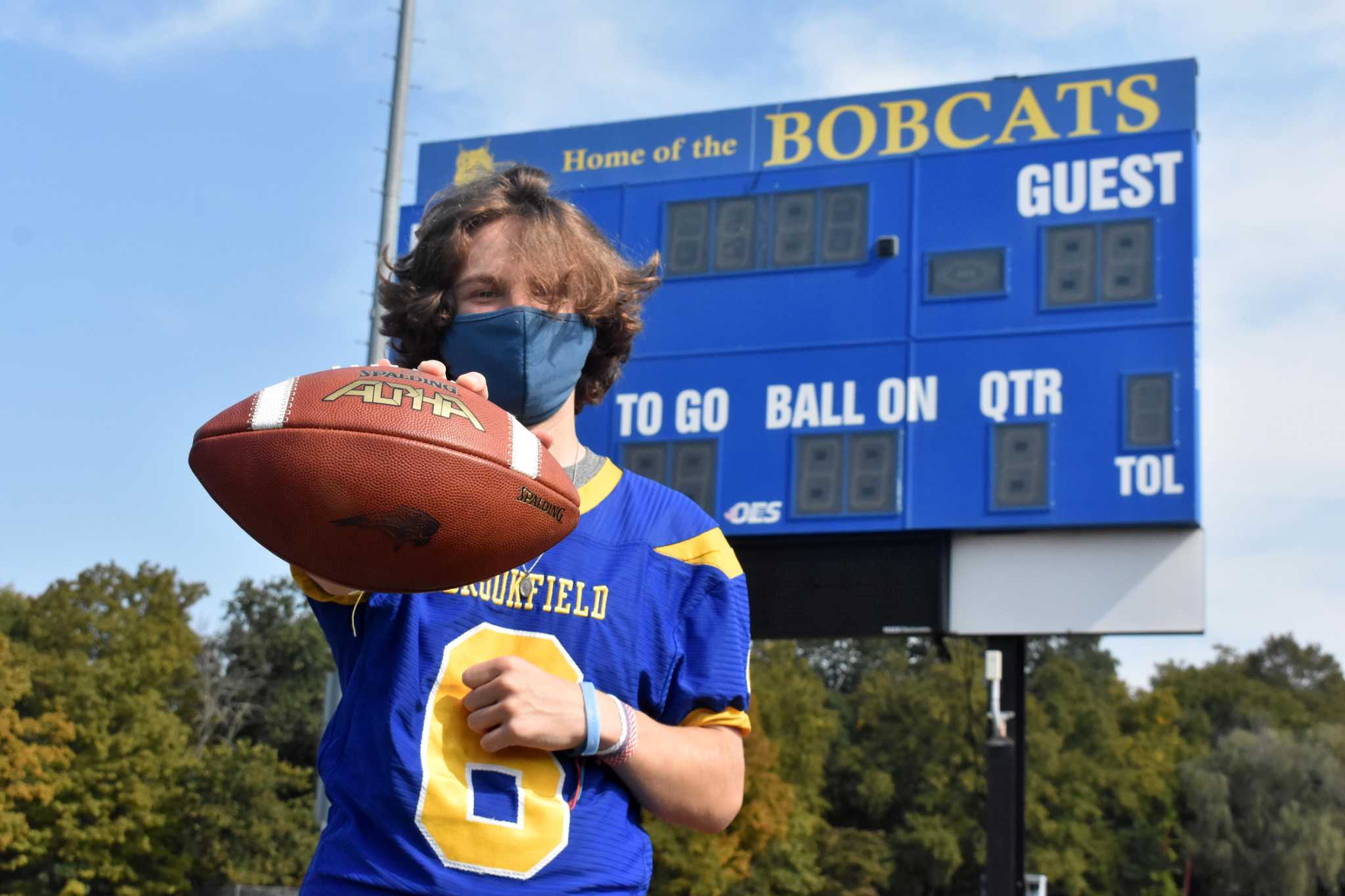 BROOKFIELD — Jed Rajcula was standing over center with about 30 yards separating him from the end zone.

He took the snap and called his own number, rumbling inside the 5-yard line before getting hit by a New Milford defender.

Rajcula, a junior at the time, braced himself and landed square on his left shoulder. The quarterback stayed in the game for a couple of more plays, helping his team get into the end zone before the pain was too much to bear, forcing him to exit the game.

A broken collarbone was the diagnosis. The play might have been the last for Rajcula at Brookfield.

A proposed modified season in the spring is his only hope, with the cancellation of 11-on-11 football this fall.

“When it first happened, I was devastated,” Rajcula said, who attended Brookfield games as a child and has been waiting for his chance since then. “I was beside myself. I really wanted to play.”

Rajcula also wants to play at the next level, in Division III specifically, where he hopes to pursue a degree in either finance, business or law.

With only four starts under his belt, there hasn’t been a lot to show college coaches.

“The ones that I have heard back from said that it’s not enough (film),” Rajcula said. “Not enough film to properly evaluate me.”

He has been working with his quarterback coach, Will Arndt, who starred at Newtown and WestConn before becoming a quarterback with the CFL’s BC Lions.

Arndt has helped Rajcula create a film reel with combine-style throws and workouts, just trying to show coaches something new.

“They want more live reps and I don’t have a lot of many live reps,” Rajcula said.

Rajcula saw very limited time as a freshman. As a sophomore he saw a couple of snaps during the regular season. It was in the Class M quarterfinals against Berlin where he began to show his potential.

Trailing 16-0 in the fourth quarter, Rajcula came in and led the Bobcats to their only touchdown, a 10-yard pass to Trevor Story.

The future was bright for the Bobcats with Rajcula leading the way.

“Jed’s a good quarterback,” Brookfield coach Bryan Muller said. “He understands he can make every throw on the field.”

That lasted all of four games, when Rajcula went down with his injury.

“He was working hard, making the reads, fixing the mistakes he was making,” Muller said.

After his junior season was cut short, and after spending a couple of weeks feeling sorry for himself, Rajcula returned to the film room, began studying the game and helping fellow quarterback Zahir McLean-Felix prepare.

When the season ended and when he was fully healthy, Rajcula hit the weight room, worked with his quarterback coach and prepared for his senior year.

That all ended when 11-vs.-11 football was canceled after the Department of Public Health maintained its recommendation not to play, labeling it a high-risk sport for transmitting COVID-19

“It killed me,” Brookfield senior Shawn McGee said. “He’s one of my best friends and he’s our quarterback. We have a great connection together on the field and off the field. It just killed me to see that his season was over.”

A spring season is still a possibility. The CIAC announced Sept. 29 a potential makeup season in March and April for sports that don’t finish at least 40% of their games, including football.

Despite everything he has gone through, from overcoming an injury to dealing with the uncertainty of a season being played, Rajcula isn’t dwelling on it.

“Yeah, but stuff happens,” he said. “I’m mad about it, I’m upset. I wish that we could have this senior season, but it’s life. Things happen.”

And while he hopes he will have a chance to get more live reps so he can update his film, he is going to keep on sending his film, to hopefully get a chance.