The cross country season has ended in Connecticut following the completion of conference championships, but this weekend some of the top runners across the state will compete in their most challenging meet of the year.

The Northeast Cross Country Club Championships will take place on Saturday in Montgomery, New York as familiar names such as Gavin Sherry and Kate Wiser will compete among the top runners in the region. Runners will be competing as non-affiliated as the race is not sanctioned by the NFHS nor the CIAC.

The meet will have a boys and girls Championship Race, a seeded race and an unseeded race.

“I am just going to take this race a little bit more seriously I would say,” Gavin Sherry said. “I think because this is one of my last races this season and there is so much competition, it really is more of a race where I need to dial down and focus. I am dedicating this whole week to making sure I eat well, sleep well and recover well. I’m looking for a great performance.”

“I think this race is what I am using as the big meets, just so I have something to use my training for,” Wiser said. “It doesn’t replace the meets we didn’t get, but I am excited to be racing these girls for the first time this year.”

Wiser and Noble were the top two finishers in last year’s State Open, while Scrimgeour has dominated the CCC-A Division in her first season of cross country, posting very good times. 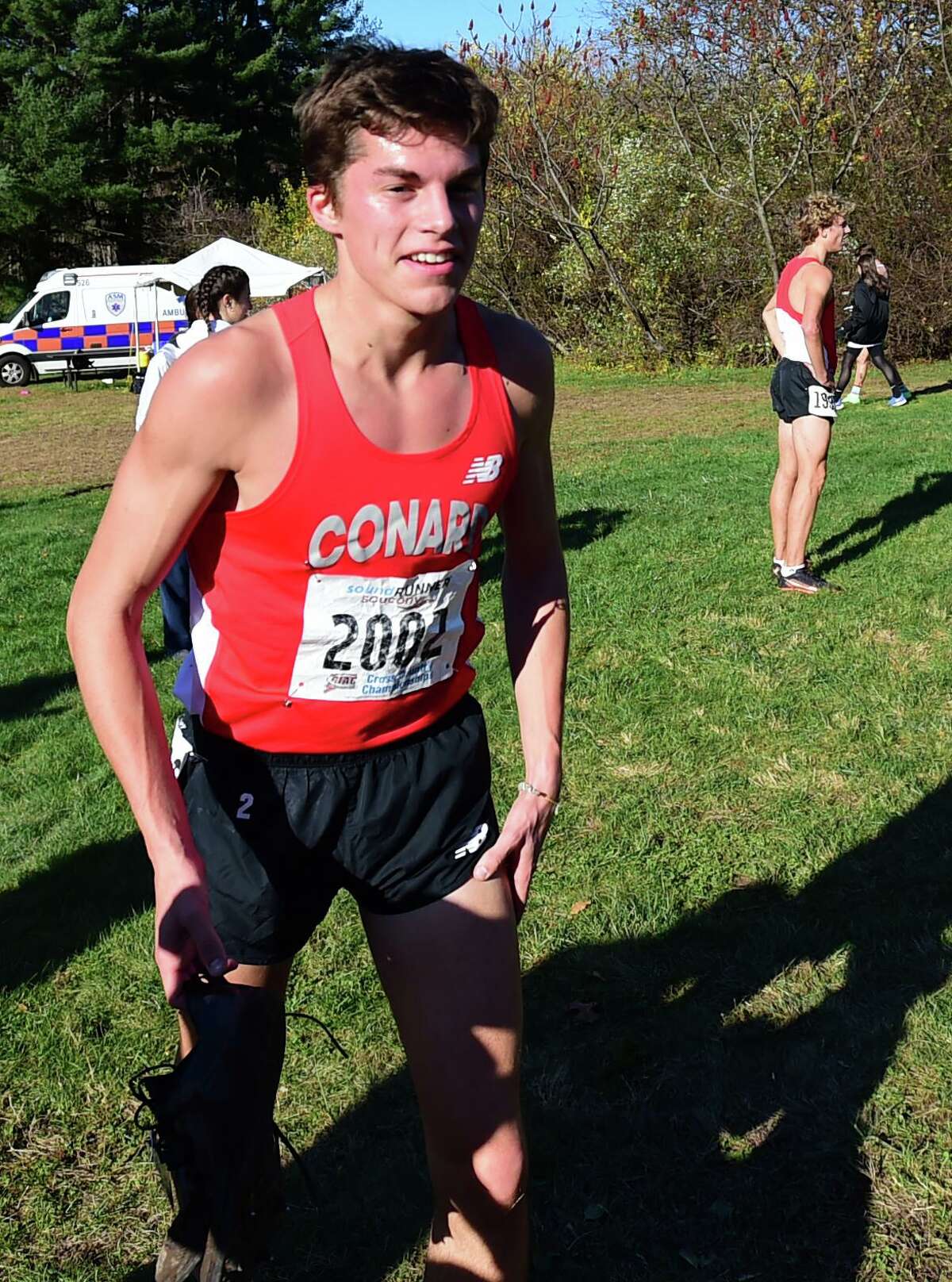 New Haven Connecticut – February 22, 2020: Mari Noble of Greenwich H.S. is in the lead during most of the race, right, before Chloe Scrimgeour of Conard, the eventual winner, left, makes her move in the 3200-meter run during the CIAC State Open Indoor Track Championship Saturday at the Floyd Little Athletic Center in New Haven.

In a season without statewide meets where teams only competed within their local geographical locations, the NE XC Club Championships present a fresh opportunity.

“I am really looking forward to race against the other Connecticut guys that I haven’t been able to race against this year,” Namiot said. “Beverly, DeAngelo, and Callum Sherry I was looking forward to racing at the beginning of the season because I think we are all going to be pretty close. Also having the New York and Jersey guys there will drive the times down and make it a fun race.”

Namiot and King will run together again as the two have essentially equaled each other all season, leading Ridgefield to the FCIAC Central title.

“We are trying to get in the mindset that this is a bit of a replacement for the state championship race,” King said. “Obviously there isn’t anything like that, but if we were to have a State Open the two teams we were most anticipating were Conard and Hall.”

Runners like Nicholas Bendtsen of Wolcott were unable to compete in any playoff races this season, making this race their entire postseason.

“This will be my first cross country race since the beginning of November,” Bendtsen said. “I have gotten a lot of good training in that time. As far as competition goes, this will be the best I face this year. This is definitely a substitute for the postseason meets that usually take place in November that we missed out on this year.”

There will be 24 Connecticut runners in the boys seeded race while eight athletes will compete in the girls seeded race.

Sweeney, who was in the midst of a breakout season with New Milford, finds herself in the same position as Bendtsen.

“I had the best season of my life this year after making a big improvement with the mentality of running,” Sweeney said. “That is why I became a lot more consistent. This year I was really looking forward to redeeming myself in SWC’s.”

Projected to be the 4th place SWC finisher, Sweeney was unable to compete in the meet after a family member tested positive for COVID, forcing her into quarantine.

“Originally I wasn’t going to do this race, but I felt like I needed to finish the season with something,” Sweeney said. “The season felt unfinished so this race seemed like the perfect way to finish it.”

Even Thanksgiving will not steer these runners off course, as a modest holiday celebration will take place before the weekend.

“There won’t be any pie or anything like that,” Wiser said jokingly. “But I am used to that because the last four years usually regionals take place the weekend after. It has been a while since I’ve had a normal Thanksgiving.”

Though not celebrating in traditional fashion, Gavin Sherry expressed how thankful he is for the opportunity this weekend, as well as the season that was had.

“I am thankful for being able to do this,” Sherry said. “We are lucky to be in a state that has had COVID under control for the most part. We have done well enough that we were able to have even somewhat of a season and I am so thankful for that. It still sucks not to get to go to the legendary Wickham course and run the green monster, but you make the most of what you get, and we got a lot this year.”