Already the school record-holder in the 50, 100 and 200-yard freestyle events, Trumbull junior Lauren Walsh had her sights set on establishing the school mark in the 500 freestyle at the FCIAC East Region Championships.

Registering a time of 4:58.13, Walsh accomplished her goal.

Walsh’s school record showing in the 500-yard freestyle was one of the highlights of the meet for Trumbull, which won the FCIAC East title with a team score of 574 points. Fairfield Warde placed second in the team standings (459), followed by Fairfield Ludlowe (322) and St. Joseph (270).

Trumbull competed against Warde in one portion of the FCIAC East Championships. Ludlowe and St. Joseph faced each other in the meet’s other portion. The results from each meet were combined to determine the individual and team champions.

“It was one of the great meets for us, we did a lot better than I thought we would,” Trumbull coach Bill Strickland said. “The races were a lot of fun to watch.”

Warde defeated Trumbull during the regular season by four points, so the Eagles knew they were going to be tested during the FCIAC East Championships.

“We went into the meet knowing we had to spend a lot of time putting our lineup together for this one,” Strickland said. “Warde is really good, they have some fast swimmers this year.” 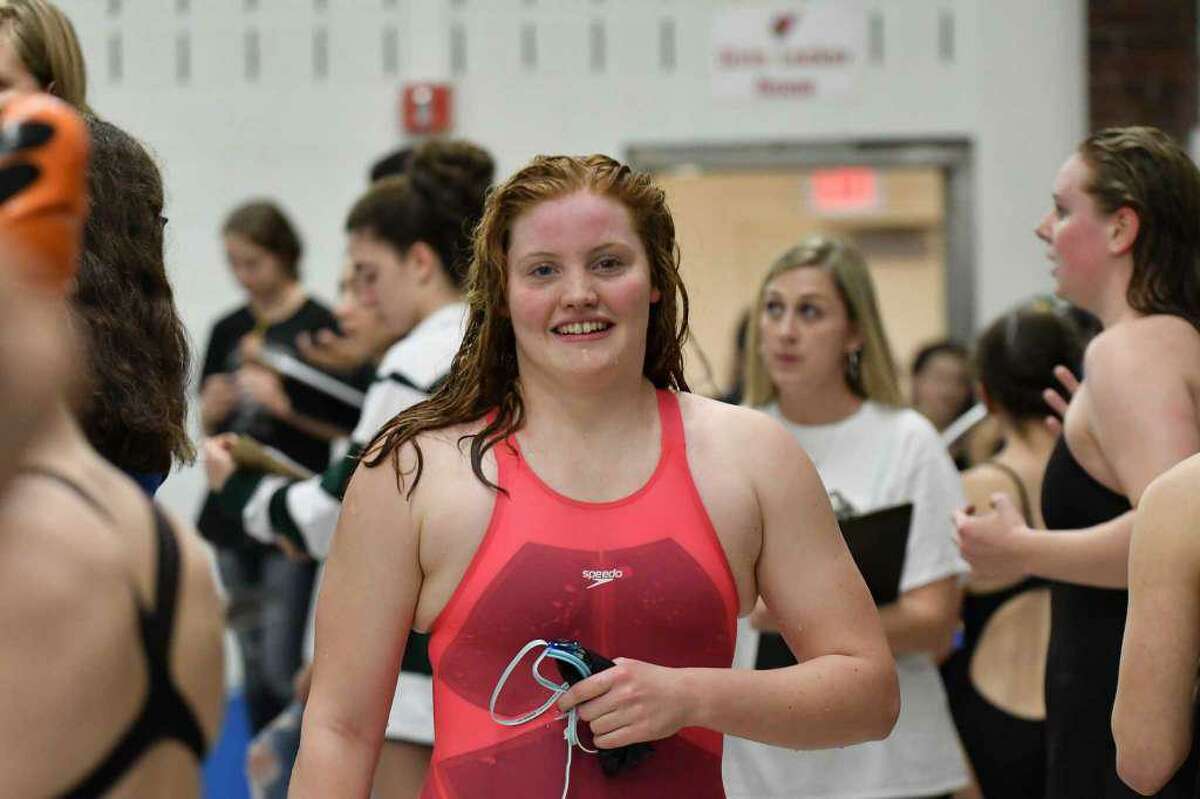 Lauren Walsh of the Trumbull Eagles swims the butterfly leg of the 200yd medley relay during the FCIAC Girls Swimming Championship  on Tuesday Nov 5 ,2019 at Greenwich High School in Greenwich, Connecticut.

Having been defeated by the Mustangs during the regular season served as motivation for Trumbull at the regional meet.

“It was a good wakeup call for us,” Strickland said. “It was on the back of our minds that they beat us, so we were using it as motivation. In a season like this, you are thinking how you can keep the team motivated? Well, redemption is one of the great motivators.”

“Lauren had secured the other freestyle records in the school,” Strickland said. “She swam a 58 on the first 100 yards and she finished with a 57 on her last 100. It was a very strong swim. That was a personal-best for her.”

Walsh also finished first in the 100-yard breaststroke, clocking in at 1:02.12. Her time in the event was an All-America performance. Her finish also establish an FCIAC record. Kaylin Moss of Wilton set the previous mark (1:02.84) in 2011.

“It was a great test for her individually,” Strickland said. “She had a great swim and was very happy with it.”

Walsh also holds a school record in the 200 IM, the 100 butterfly and the 100 breaststroke.

Freshman Kristen Racicot of Trumbull gave her team a pair of winning efforts. Racicot won the 200-yard individual medley in 2:18.34, then touched the wall first in the 100 butterfly (1:03.40). Both were season-best ties for Racicot.

“Kristen is a really strong freshman,” Strickland said. “We can put her in to swim anything. Our freshman class is strong, with her leading us in the 2 IM and 100 butterfly. That gives us a strong base.”

In the 100 freestyle, St. Joseph sophomore Daniele Tanaka Sales earned top honors, clocking in at 55.69 seconds. Warde’s Mary Ryan was second (56.44) and right behind her was Trumbull’s Norah Hampford (56.94).

“Jackie Dale and Norah in the backstroke secured the meet for us,” Strickland said. “Our juniors and sophomores really stepped up.”

“Our relays did great, they (Warde) beat us in the 200 ad 400 freestyle relay in the regular season, so it was great to see our team swim so fast,” Strickland said.

Captained by Jacqueline Dale and Mishka Kapoor, Trumbull swam its best at exactly the right time.

“Overall, everyone contributed in this meet,” Strickland said. “Our senior captains kept the team together during a challenging season with what’s going on and we were able to send them out on top.”

With Walsh returning next season for her senior year and numerous freshmen and sophomores on the squad, Strickland anticipates a successful 2021 season.

“It’s really exciting, we have a bright future,” he said. “We lost a big senior class from last year, but we had a big freshman class this year that contributed a lot.”