Volleyball: A look at some of the state’s top performers for Week 5

Aerin Bowman, Darien: The Blue Wave junior had a game-high 14 kills and 4 blocks during a loss to Greenwich in a five-set thriller on Oct. 29.

Ali Castro, Trumbull: The senior had 64 assists in back-to-back victories over Ludlowe during the past week. That total included 37 during Tuesday’s three-set win, when she also added 6 digs and 2 kills.

Emily Ericson, Bristol Central: Ericson had a double-double with 18 kills and 10 digs to go along with 3 aces and 3 blocks during a five-set loss to Bristol Eastern on Oct. 29. She followed up with a 16-kill performance in a 3-0 win over New Britain on Monday.

Jessica Hanrath, Coventry: Coventry’s setter had a combined 38 assists, 21 digs, 4 kills and 10 aces in back-to-back shutouts of Ellington and Bolton.

Emily Hart, Platt: Hart, a sophomore, led Platt with 27 assists and 13 digs in a five-set victory over rival Maloney on Thursday. Hart also had 4 aces and 5 kills in the win.

Zoe Lowe, Bristol Eastern: Lowe had 19 kills and 19 aces as the Lancers improved to 10-0 with a 3-2 win over Bristol Central on Oct. 29. Lowe also added two aces and one block to the effort. 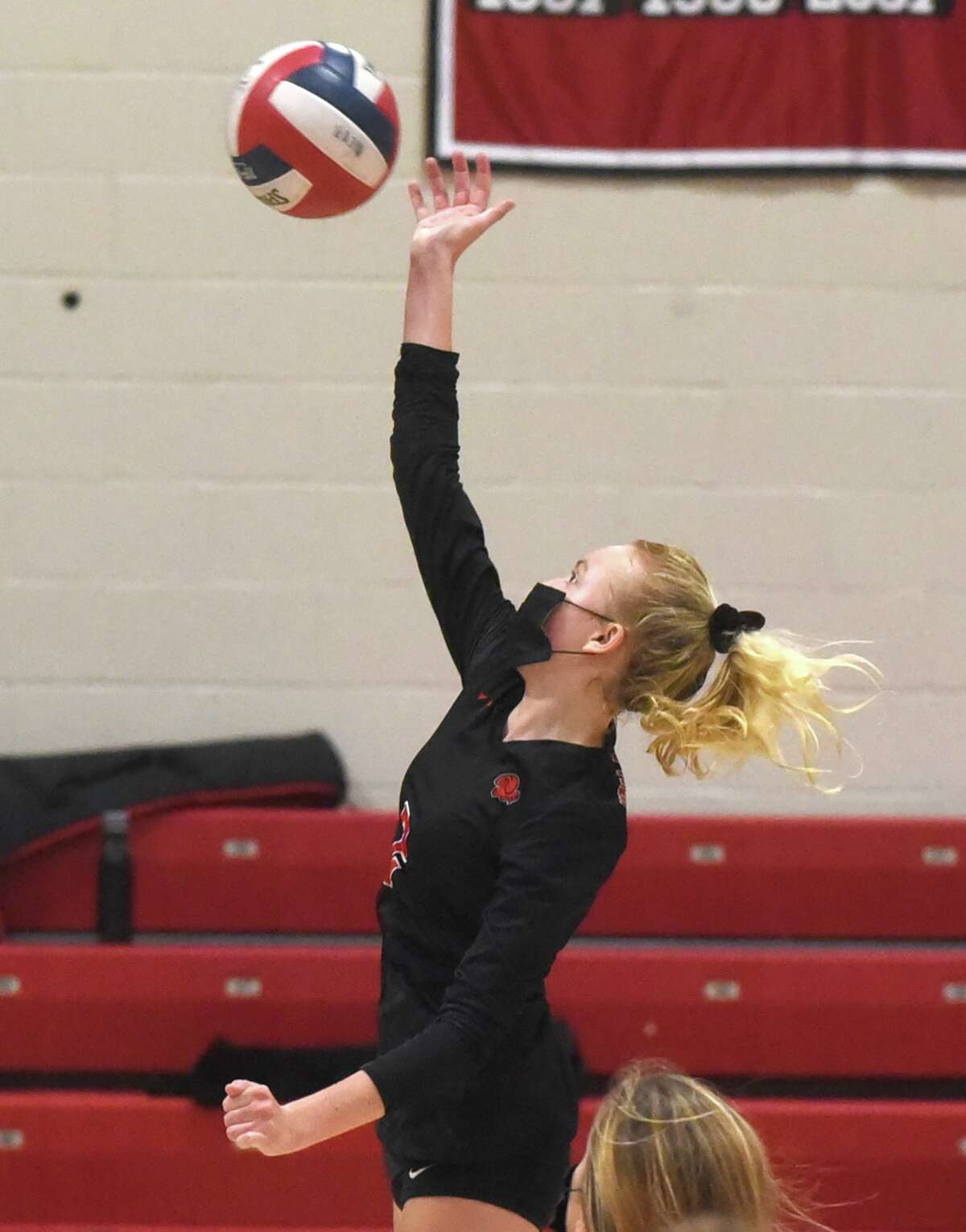 New Canaan’s Elle Sneddon (2) goes up for a shot during a girls volleyball match against Greenwich in New Canaan on Thursday, Oct. 22, 2020.

Darien’s Aerin Bowman (9) sends a shot at Greenwich’s Caroline Mrdeljia (15) during a girls volleyball match in Darien on Thursday, Oct. 29, 2020.

Nyssa Park, Conard: In two matches last week, Park, a junior, had a combined 64 assists, 23 digs and 5 kills. Conard lost in five sets to Simsbury and rebounded with a 3-0 win over Hall.

Brenna Piller and Kate Winkleback, Simsbury: Piller, a sophomore, had 50 assists, and Winkleback, a senior, had 43 digs to help lead the Trojans to a five-set win over Conard on Oct. 26.

Kelli Raines, Avon: Raines had a huge night with 23 kills and 17 digs as the Falcons’ dropped a five-set match to Southington on Monday.

Lilly Saleeby, Greenwich: Saleeby, a senior outside hitter, had a double-double with 11 kills and 11 digs as the Cardinals remained unbeaten with a 3-2 road win at Darien Oct. 29.

Kendall Scholz, Wilton: Scholz led the Warriors with 19 kills and 7 digs during a 3-2 victory over Brien McMahon on Tuesday.

Vana Servos, Westhill: Servos had 55 assists, 34 digs and 7 kills in a two-match split with New Canaan during the past week. Westhill lost 3-0 Oct. 29, but answered with a 3-1 win over the Rams on Tuesday.

Kaley Smith, Southington: The senior libero racked up 30 digs as Southington outlasted Avon 3-2 on Monday. She also added three aces to the win.